If we wish to be free, we must fight. Shall we gather strength by irresolution and inaction? Is life so dear, or peace so sweet, as to be purchased at the price of chains and slavery? I know not what course others may take; but as for me, give me liberty or give me death. — Patrick Henry (March, 1775)

History of India is nothing but the struggle between untouchables and so called upper castes. However the Indian historians have always misled us by not showing the true face of Indian History.

The glorious victory of few hundred untouchable soldiers over numerically superior Peshwas army in the battle of Koregaon, fought on 1st January, 1818, is one such chapter in Indian history whose significance has been carefully hidden.

On that day, when many were busy celebrating the new year, a small force of 500 mahar (an untouchable caste in Maharashtra) soldiers in the British army were preparing for a war against the most brutal Indian state of that times – Brahmin Peshwa rulers of Pune, Maharashtra.

In the history books, this battle is considered an important one and is known as second Anglo-Maratha war that resulted in the total destruction of Peshwa kingdom and sealed the victory of British Empire in India. However, there is a different historical dimension to this war that all of us need to be aware of.

This war was also between the Indian untouchables (who were condemned to live a life so miserable that you might not find any parallels in the world history) and Brahminism (manifested through brahmin rulers from Pune).

For mahar soldiers, this was not just another battle but it was their   battle for self-respect, dignity and against the supremacy of Manusmriti. And these soldiers, just 500 of them, defeated the Peshwa army of over 30,000 in just one day. Their victory against a mighty force is perhaps unparallel in Indian history.

Maharashtrian society under brahmin’s rule followed worst form of social discrimination based on caste wherein the lower strata of society such as untouchables were confined to the stringent Brahmanical laws and subsequently their mobility and development were impaired.

The untouchables had to carry a broom stick attached to their backs so that when they enter into city, their footprints would not pollute the path. They were forced to put a pot around their neck to carry their spit in the pot. They were not allowed to hold any arms and education was completely barred. Untouchables were killed if they did not follow these restrictions. Bhima-Koregaon battle was the answer of the untouchables to the brahmin ruling class of the country.

This battle took place on January 1st, 1818, near the banks of Bhima River in Koregaon (north-west of Pune) between few hundred mahar soldiers from the British regiment of a Bombay Native Light Infantry and the Peshwa army that constituted 20,000 horsemen and 8,000 infantry soldiers. After marching down for more than 27 miles, from Shirur to Bhima Koregaon without food and water, the untouchable warriors fought the Peshwas army for next 12 hours and by the end of the day defeated them completely.

This battle is significant for many reasons. First, British army fought this battle with a minuscule army expecting the worst. Secondly, the battle of Koregaon was one of the most important events which helped British to tear down the Peshwa Empire and subsequently the Peshwa had to abdicate. Thirdly and most importantly, it was an attempt by the untouchables of Maharashtra to break the shackles of the age-old caste order.

Dr Ambedkar with Mahar Regiment on his birthday, 1950

The men of the Bombay Native Infantry, who fought in this battle, were honored for their bravery. The official report to the British Residents at Poona recalls the “heroic valour and enduring fortitude” of the soldiers, the “disciplined intrepidity” and “devoted courage and admirable consistency” of their actions.

Much praise was showered on the untouchable soldiers, who endured the rigours of difficult marches when rations were low and diseases were high among men and animals. Whether they were charging ahead or were besieged or taken prisoner-of-war, whether they were storming fortresses or making tactical withdrawals, they always stood steadfast by their officers and comrades, never letting down the honour of their Regiments.” 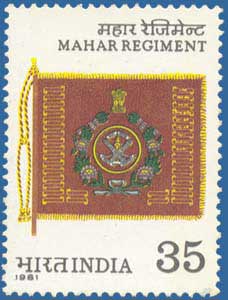 A stamp issued by Indian Government in 1981

The saga of the bravery of mahar soldiers was commemorated by the British in 1851, when they erected a Pillar (Vijay Stambh) at Koregaon inscribing the names of 22 mahar soldiers who were martyred in this battle. The pillar still stands today reminding all of us about the bravery of our forefathers and as an inspiration for our struggle against caste-system.

Dr. Babasaheb Ambedkar also used to visit Koregaon every year on 1st January to pay homage to the untouchable soldiers and to exhort Dalits to show similar courage and determination to end brahminism from the entire country. On 1st January, 1927, he organised a big convention in Koregaon and brought the memories of bravery of the untouchable soldiers in public knowledge.

On this and every New Year eve, rather than indulging ourselves in mindless revelry let all of us pay rich tributes to our heroic forefathers who, through their bravery and courage, tore down the powerful Peshwai and brought freedom for untouchables from the fanatic brahmin rulers who ruled the land according to the diktat from Manusmriti. It is also a powerful occasion for all of us to become little more aware towards our rich history.