Labour Day or May Day is celebrated all over the world and is a celebration of the working classes that is promoted by the international labour movements. In India if workers have gotten any right, it is because of Dr Ambedkar hence not to remember Dr Ambedkar on Labour Day will be an injustice to Dr Ambedkar’s legacy.

Dr Ambedkar’s contribution towards society is immense but almost everyone ignores the role of Dr Ambedkar as a labour leader. The Department of Labour was established in the year November 1937 and Dr Ambedkar took over the Labour portfolio in July 1942. The policy formulation and planning for the development of irrigation and electric power was the major concern. It was the Labour Department, under the guidance of Dr Ambedkar, that decided to establish “Central Technical Power Board” (CTPB) for power system development, hydel power station sites, hydro-electric surveys, analysing problems of electricity generation and thermal power station investigation.

If there is any one person who secured the rights of labourers in India, it was none other than Babasaheb Ambedkar. Without Dr Babasaheb Ambedkar, today the future of India workers would have been in pitch darkness. He is the only leader in India who was multi-dimensional and a great visionary. The so-called upper castes never gave credit to Dr Ambedkar’s contribution in building a great nation, which is today one of the biggest developing economies of the world. All this has become possible only because of Dr Ambedkar’s robust economic policies, which have saved India even in the times of great economic depressions. Be it the founding guidelines of the RBI or the principles governing any other aspect of the economy, Dr Ambedkar has given the best India could ever have had.

It was Dr Ambedkar who brought in the 8-hour working day to India, bringing it down from 14 hours. He brought it in the 7th session of Indian Labour Conference in New Delhi, November 27, 1942.

All workers should be grateful to Dr Ambedkar, especially women employees, as Dr Babasaheb Ambedkar framed many laws for women workers in India such as ‘Mines Maternity Benefit Act’, ‘Women Labour Welfare Fund’, ‘Women and Child Labour Protection Act’, ‘Maternity Benefit for Women Labour’, and ‘Restoration of Ban on Employment of Women on Underground Work in Coal Mines’.

If you are happy with your company providing you health insurance, the credit should go to Dr Babasaheb Ambedkar. Employees State Insurance (ESI) helps the workers with medical care, medical leave, physical disability caused due to injuries sustained during work, workmen’s compensation and for the provision of various facilities. Dr Babasaheb Ambedkar enacted and brought it for the benefit of workers. India was the first nation among East Asian countries to bring Insurance Act for the well-being of employees.

END_OF_DOCUMENT_TOKEN_TO_BE_REPLACED

The Pasmanda Movement – Bihar and Beyond

Today in Dalit History‬ we bring to forefront a contemporary anti-caste struggle of Dalitbahujan Muslims in India –the Pasmanda Movement. “Pasmanda” is a Persian term meaning “oppressed” in and encompasses those who make up more than 80% of the total Muslim population in India – Dalit and backward castes Muslims.

The Pasmanda ideology first took shape as a social movement in the 1990s in the state of Bihar. It challenged the authenticity of a monolithic Muslim identity in India by underscoring the existence of three Muslim caste-groups; Ashraf (upper castes), Ajlaf (middle castes) and Arzal (lower castes).

It asserted that although Islam does not recognize hierarchy based on birth, in practice, caste has persisted within these communities for centuries. The realities of the low caste Muslims like Julahas (weavers) and Lalbegi (scavengers), existence of caste-based endogamy and the Ashraf domination in Muslim religious forums and leadership were beginning to be seen as unacceptable. Pasmandas demanded the political space, discourse and power that had been historically denied to them.

With the formation of two key organizations; the All-India United Muslim Morcha in 1993 and then the All India Pasmanda Muslim Mahaz in 1998, the Pasmanda movement was ready to break Ashraf hegemony. The main goal of these organizations was the constitutional recognition of affirmative action for Pasmanda communities .

Under the Government of India Act of 1935, a list or schedule was drawn up of castes that were recognized as extremely backward. These castes had both Hindu as well as Muslim members and provisions were made for their collective socioeconomic upliftment. However, in 1950 a presidential order was passed according to which these special benefits would be available only to those Scheduled Castes who professed to be Hindu. With one stroke of the pen, non-Hindu Scheduled Castes were henceforth denied the benefits that the 1935 Government of India act had provided for them.

The work done by the Pasmanda movement has quickly spread from Bihar and has so far convinced the assemblies of Bihar, Uttar Pradesh, and Andhra Pradesh have all passed resolution supporting the demand for inclusion of Christian and Muslim Dalits among Scheduled Castes.

Although anti-caste struggles are not new to the Muslim communities in India, the Pasmanda movement is working with a rapidly shifting political landscape. Its has expanded its resolutions from affirmative action advocacy to forming socio-political alliances with other Bahujan communities as well as extending support to labor and strengthening the policy framework for Pasmanda women. 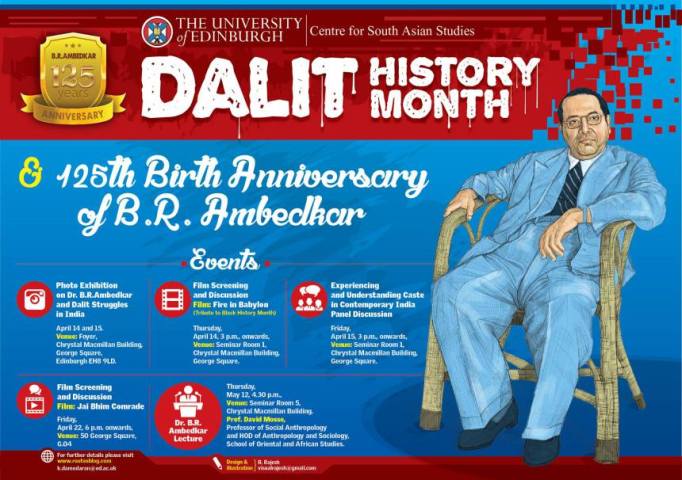 I have your letter concerning the case of the Negroes of America and the untouchables in India before the United Nations. As you says a small organization of American Negroes, the National Negro Congress has already made statement which I am enclosing. I think however, that a much more comprehensive statement well documented will eventually will laid before the United nations by the National Association for the Advancement of colored people. If this is done, I shall be glad to send you a copy.

I have often heard of your name and work and of course have every sympathy with the Untouchables of India. I shall be glad to be of any service I can render if possible in the future.

[Excerpt from Dr. Babasaheb Ambedkar’s writings ‘Essays on Untouchables and Untouchability’, Chapter 2, titled – ‘The Revolt of the Untouchables]

The movement of the Untouchables against the injustice of the Hindu Social Order has a long history behind it, especially in Maharashtra. This history falls into two stages. The first stage was marked by petitions and protests. The second stage is marked by open revolt in the form of direct action against the Hindu Established Order. This change of attitude was due to two circumstances. In the first place it was due to the realisation that the petitions and protests had failed to move the Hindus. In the second place Governments had declared that all public utilities and public institutions are open to all citizens including the Untouchables. The right to wear any kind of clothes or ornaments are some of the rights which the British Indian Law gives to the Untouchables along with the rest. To these were added the rights to the use of public utilities and institutions, such as wells, schools, buses, trams. Railways, Public offices, etc., were now put beyond the pale of doubt. But owing to the opposition of the Hindus the Untouchables cannot make any use of them. It is to meet the situation, the Untouchables decided to change the methods and to direct action to redress their wrongs. This change took place about 1920.

Of such attempts at direct action only few can be mentioned so as to give an idea of the revolt of the Untouchables against the Hindu Social Order. Of the attempts made to vindicate the right to use the public roads, it is enough to mention one, most noteworthy attempt in this behalf was that made by the Untouchables of Travencore State in 1924 to obtain the use of the roads which skirted the temple at Vaikorn. These roads were public roads maintained by the State for the use of everybody, but on account of their proximity to the temple building, the Untouchables were not allowed to use certain sections, which skirted the temple too closely. Ultimately as a result of Satyagraha, the temple compound was enlarged and the road was realigned so that there the Untouchables even if they used it were no longer within the polluting distance of the temple.

Of the attempts made to vindicate the right to take water from the public watering places, it is enough to mention the case of the Chawdar Tank.

END_OF_DOCUMENT_TOKEN_TO_BE_REPLACED

Kalaram Temple entry movement formed a pivotal role in the Dalit movement in India. B. K (Dadasaheb) Gaikwad and Dr. B. R. Ambedkar led a protest outside the temple on 2 March 1930, in order to allowing Dalits into the temple.

The movement was to have a right to enter temple, it was more towards having equal rights. We don’t want to go to temples though but we should have rights.