Check out the new website www.velivada.com and bookmark it. Will be sharing some valuable stuff there.

In case you also have some article or important documents to share with the community. Please submit those here.

Whenever Uttar Pradesh and/or Bihar go to polls, the media is agog with the term ‘identity politics’. The shrill campaign coverage of mainstream media paints identity politics as being inimical to egalitarian society and destructive to the supposed holy-cow of Indian democracy. A well-known Gandhian has recently written in a National English newspaper that the “U” in Uttar Pradesh stands for ungovernable mainly because it is ridden with the scourge of identity politics. He longs for the glorious past of Uttar Pradesh in an eerie similarity to the ‘Make America great again’ slogan that we are all too familiar with now. Thus he equates the rise of bahujan leaders of Uttar Pradesh with regression of the prospects of the state.

This narrative needs to be dissected to comprehend the ire of such Gandhians and other media pundits. First, how about a counter-narrative? Today, in 2017, almost 70 years after the birth of a nation called India, but more importantly, more than three thousand years after Vedic ‘civilization’ spread over this land, Uttar Pradesh is the only state in the Union of India where a freestanding dalit political party stands a chance at the hustings to rule the state. And Uttar Pradesh is only one of 2 states (the other being Bihar) where OBCs have taken center-stage in ruling unopposed for the past 2 decades. Leaders from the bottom of the Vedic step-ladder such as Mayawathi (dalit), Nitish Kumar, Lalu Prasad and Mulayam Singh Yadav (all OBCs) became forces to reckon with only as a result of assertion of their backward identity. It is only because they raised their banners in the name of their oppressed background that even the National parties today are forced to sing OBC and dalit tune. While it is easy for self-proclaimed political pundits to brush off bahujan parties with the deprecating label of ‘identity politics’, millions of people from all over India that hail from these sections can vouch for the dignity that a Lalu Prasad, a Mayawathi or a Kanshi Ram brought to them by standing up to oppression and bringing them in to the mainstream of political discourse. There is no means to measure the confidence that these leaders and parties instill in the bahujans across the country. In fact, it is a travesty that other states have not seen such an upsurge in bahujan assertion. To put things in historical context, not too long ago, the castes that they represent were banished to menial jobs that savarna hindus would abhor to even dream of, never had the right to own land or even stand next to a savarna but today have risen to rule themselves and the savarnas too.

END_OF_DOCUMENT_TOKEN_TO_BE_REPLACED

On 17th January Rohith Vemula, a Dalit student from the University of Hyderabad was forced to commit suicide by University administrations.

In the memory of Rohith Vemula, an event is being organized at the University of Hyderabad by his friends and family members where Radhika Vemula, mother of Rohith, Jaan Mohammad, brother of Akhlaq and survivors of Una Dalit Atrocity will be present on 17th January 16, 2017 at 15:30hrs

Rohith Vemula’s mother appeals everyone to join it.

Who deserves to be on the Indian currency?

So since when Dalits were allowed to worship Tulsi?

So since when Dalits were allowed to worship Tulsi?

I remember father telling me stories of how lower castes were beaten for just having Tulsi plant at home. I don’t know the situation of rest of the India but I can say with some certainty that Brahmins used to say Tulsi plant is ‘Brahmini’ (female Brahmin) and it should not be at Dalit homes and Brahmins of Punjab usually used to organise ‘marriage of Tulsi plant’. I believe our older generation can shed more light on this.

I also remember someone asking my father that you have Tulsi plant at home when you are organising its marriage? My father have the sense of humour and said I will let it die alone!

In 2 decades or so from Tulsi plant being ‘Brahmini’, it has become a topic of Tulsi Poojan Diwas and Brahmins of India are asking Dalit-Bahujans to worship it. All this makes many things, even more, clearer to me that how Brahmins installed 33 crore Brahmin devi-devtas and how to Brahmins change so that they can fool Dalit-Bahujans. From Good Governance Day to Tulsi Poojan Diwas, anything and everything to fool us!

The Ballot or the Bullet – By Saheb Kanshi Ram Ji 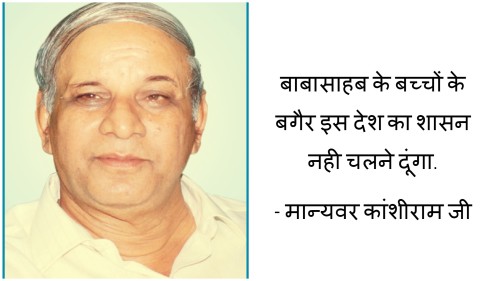 ~ If you think only with Ballot you can become a governing class then you are keeping yourself in the dark. We have to become rulers through ballot but we have to prepare and be ready for the bullet also. We took charge of the UP with ballot but when elected upper caste MLAs from opposition parties came to assembly they started chanting ‘Jai Shree Ram’ and creating the ruckus in the assembly by jumping on the chairs and tables and throwing various devices in the air. They thought Bahujan Samaj people are afraid now and for around 20 minutes there was a backlash. It was already coming in the newspapers that Savarana Hindus have lost the power now there will be a backlash but I was saying in response to backlash there will be a strong frontlash! We won with the ballot and we have to prepare ourselves our community to win with the ballot, but if after winning the election with ballot they don’t let you run the government properly you need to do something. Though we didn’t felt the need to use the bullet but no matter how small weapon came to our hands, we used it and they went out with bloody noses! Those who didn’t accept the verdict of ballot so we replied them in their language. So, friends we have to bring change and rule through ballot but if a few people use bullet or pather-lathi or use unconstitutional powers to suppress us for that we have to make our community ready to fight them also.