Thousands of candles can be lit from a single candle, and the life of the candle will not be shortened. — Buddha

Savitribai Phule (3rd January1831- 10 March 1897), one of the supreme names who fought against the totalitarianism of caste and other social evils in India. She was born in Naigaon, (Tha. Khandala, Distt. Satara) her father’s name was Khandoji Nevse and mother’s name was Lakshmi.

Historians, who are ought to be free from fear, sincere, open minded, open hearted, truth seeker and also have courage to show the truth at any cost. But it’s unfortunate that historians have shown distorted picture and did not show the truth to the people. As a result of this, almost everyone confuses history with fiction & historians have made people blind, deaf & dumb and have disabled people from thinking rationally. I have always wondered why the ‘Teachers’ Day’ in India is not celebrated on the birthday of Savitribai Phule, the lady who started first ever school for the downtrodden and was first lady teacher of India?

Mahatma Jotiba Phule and his wife Savitribai Phule were first among the people who declared war against Casteism and Brahminic-Casteist culture. The Maharashtrian pioneering couple led mass movement of uniting oppressed class against the Brahminic values and thinking. Savitribai Phule worked as an equal partner in the mission of uplifting the poor and oppressed people.

Though, she was formerly uneducated, she was encouraged and motivated by Mahatma Jotiba Phule to study. Later on she became the first lady teacher of India in the school started by her husband. Life of Savitribai Phule as a teacher in the school at the time when upper caste orthodox people used to look down wasn’t easy and many a times they used to pelt stones and throw dung on her.

Read also – Book Review of “A Forgotten Liberator : The Life and Struggle of Savitribai Phule”

The young couple faced severe opposition from almost all sections. Savitribai was subject to intense harassment everyday as she walked to the school. Stones, mud and dirt were flung at her as she passed. But Savitribai Phule faced everything courageously. Savitribai Phule was the first Dalit woman, in-fact the first woman whose poems got noticed in the British Empire. Savitribai Phule was the mother of modern poetry stressing necessity of English and education through her poems. Her first collection of poems – Kavya Phule – was published in 1854.

Be self-reliant, be industrious

All gets lost without knowledge

We become animal without wisdom,

End misery of the oppressed and forsaken,

You’ve got a golden chance to learn

So learn and break the chains of caste.

Throw away the Brahman’s scriptures fast.

At a time when even the shadow of untouchables was considered impure, when the people were unwilling to offer water to thirsty untouchables, Savitribai Phule and Mahatma Jotiba Phule opened the well in their house for the use of untouchables. It was a challenge thrown at the Brahmins to change their mindset towards untouchables. (But even after almost 200 years, dalit (untouchables) still strive for water rights.)

They took initiative to give education to downtrodden, thinking that education is necessary for the restoration of social and cultural values. Savitribai Phule started Mahila Seva Mandal in 1852, which worked for raising women’s consciousness about their human rights, dignity of life and other social issues. She went on to organise a successful barbers strike in Mumbai and Pune against the prevailing practice of shaving of widows’ heads. She also played a vital role in the Satya Shodhak Samaj movement started by his Mahatma Jotiba Phule.

During the 1876 to 1898 famines, Savitribai Phule worked courageously with her husband and suggested many new ways to overcome the difficult time. They started distributing free food at many locations. She died while she was nursing a plague- affected child as she got infected while serving the affected people.

Rationally thinking people will definitely question, how could it be possible that the name of such a legend (Savitribai Phule) is omitted from the history books, when names like Jhansi ki Rani; Lakshmibai and names of wives and ‘girl-friends’ of Gandhi-Nehru family are given in history books?

Women of the Indian society are not aware of the greatness of Savitribai Phule, who dared to pursue the noble profession of teaching in the ‘Dark Age’. The time when women were mere objects-to-be-used, education for women was considered no less than a punishable crime; she dared to speak against the unpardonable boundaries imposed on women in Indian society, she ignited millions lives, for which today’s women and everyone should be grateful to her. Isn’t it enough for us to celebrate ‘Teachers’ Day’ on Savitribai Phule’s birthday? Celebrating ‘Teachers’s Day’ on Savitribai Phule’s birthday will be a good attempt on Government’s part for women’s empowerment or at-least to show it’s concern for women’s social status.

“Savitribai Phule (1831-97), struggled and suffered with her revolutionary husband in an equal measure, but remains obscured due to casteist and sexist negligence. Apart from her identity as Jotirao Phule’s wife, she is little known even in academia. Modern India’s first woman teacher, a radical exponent of mass and female education, a champion of women’s liberation, a pioneer of engaged poetry, a courageous mass leader who took on the forces of caste and patriarchy certainly had her independent identity and contribution. It is indeed a measure of the ruthlessness of elite-controlled knowledge-production that a figure as important as Savitribai Phule fails to find any mention in the history of modern India. Her life and struggle deserves to be appreciated by a wider spectrum, and made known to non-Marathi people as well.” 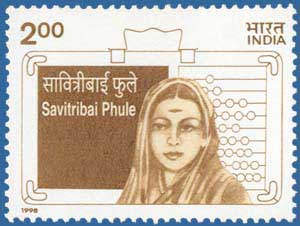 Government of India honoured Savitribai Phule by publishing a postage stamp on 10 March 1998.

Important dates/events in the life of Savitribai Phule