What does Dr. Ambedkar mean to me?

What does Dr. Ambedkar mean to me?

1. Babasaheb Dr Bhimrao Ambedkar meant to me a call ( educate, agitate, organise) to capture political power (which is the master key for the solution to all problems.)

2. Going back in the time scale, He meant to me as the unseen Commander- In- Chief of Mahar Regiment, who defeated a regime in January 1818 at Bhima Koregaon that enforced a broom to the waist, a pot to the mouth and a bell in the hand to the untouchables, after which they- the untouchables raised their heads and lived in dignity.

3. He meant to me the Warrior who shattered the shackles of inequality, bondage and cruelty by walking along with thousands of this people- men, women and children- to the Chowdar tank at Mahad in March 1927 and then thereafter made the public bonfire of Manu Smriti in the same year at the same place on 25th December.

4. He meant to me a Crusader who lead his people to assert their human rights in 1930 at Kalaram temple, Nashik. 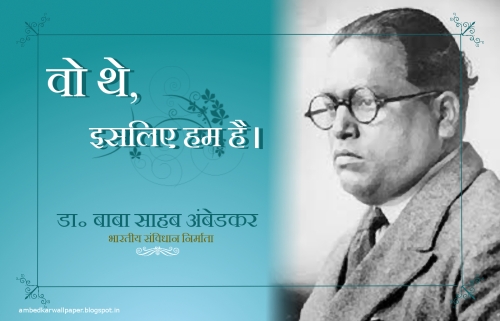 5. He meant to me a fighter, an orator and a debater at Round Table Conferences in London during 1930-32 and won the Communal Award with separate Electorates to capture the political power/to become an equal partner in political power. But alas! With a heavy, heavy heart of anguish a Saviour at Yerwada jail on 24th September 1932.

6. He meant to me the founder of own political party for the people the IPL in August 1936 and won 15 members of Legislative Council in Bombay Province of the British India in Feb 1937 as the undisputed leader of 96% of the Indian people- the SC, ST, BC, Shudras, women and the toiling masses of other castes and communities- the Bahujan Samaj.

7. He meant to me a Victor in 1942 to get sanction for separate Settlements for His people for the ownership of the lands where they tilled.

8. And having failed in Separate Electorates and Separate Settlements for His people who feed and protect and provide all the necessities of life of all living beings in the nature- and the recon, He meant to me. Ultimately as the Resurrector of the Indian Nation- the people of India that is Bharat the Republic of India on the 28th Nov 1949 when He presented the Constitution which we, the people of India enacted and adopted. 9. And finally He meant to me Bodhisatta Babasaheb Bhimrao Ambedkar when He gave the Buddha Dhamma at Nagpur Deeksha Bhumi on 14 Oct 1956 for the peace and happiness of the world- Bahujan

9. And finally, He meant to me Bodhisatta Babasaheb Bhimrao Ambedkar when He gave the Buddha Dhamma at Nagpur Deeksha Bhumi on 14 Oct 1956 for the peace and happiness of the world- Bahujan Sukhaya, Bahujan Hitaya , Bahujan Attaya. 10. And on this Mahaparinirvana on 6th Dec 1956, He meant to me as a Champion of Human Rights: Social, Economic, Political, Cultural. Who left for his people- the Bahujan Samaj a bunch of

10. And on the Mahaparinirvana on 6th Dec 1956, He meant to me as a Champion of Human Rights: Social, Economic, Political, Cultural. Who left for his people- the Bahujan Samaj a bunch of tristed and powerful lieutenants to cleanse the ills and evils and Save this Nation- India that is Bharat. And then, I see Him in the clouds picking up Manyawar Kanshi Ram as His political successor and thereafter Behanji Mayawati as His heir.

What Does Dr. Ambedkar means to you? Let us know in the comments.

4 responses to “What does Dr. Ambedkar mean to me?”