Dr. Ambedkar’s ancestral village is Ambavade, five miles off Mandanged, a small town in the Ratnagiri district of Maharashtra. His grand father Maloji Sakpal was a retired Havaldar in the Bombay Army of the East India Company. He is said to have been allotted some land for acts of bravery in the battle field.[1]  Maloji had two children – Ramji (son) and Mira Bai (daughter).

Like his father, Ramji also joined the army. He was an enlightened person who worked hard and attained proficiency in English language. He obtained Diploma in Teaching from the Army Normal School in Poona.[2] Consequently, he was appointed as a teacher in the Army School. He served as Head Master and had attained the rank of Subedhar Major. The Sakpal’s belonged to the Kabir cult along with the untouchability (Mahar) tag attached.

Ramji had 14 children, the 14th being Bhimrao (Dr. Bhimrao Ramji Ambedkar). However only three sons – Balaram, Anandrao and Bhimrao – and two daughters – Manjula and Tulasa –survived. The Bhakti movement in Maharashtra had impressed the Sakpal’s family to imbibe its spiritual content, Ramji Sakpal brought up his children under strict religious atmosphere at time performing poojas and offerings with great devotion. Thus, during childhood Bhimrao used to sing devotional songs. Ramji Sakpal’s attitude towards his children was basically responsible to the all-around development of Dr. Amebdkar. Ramji was good in English and Arithmetic. He was a teetotaler and as mostly interested in his won and his children’s spiritual development. 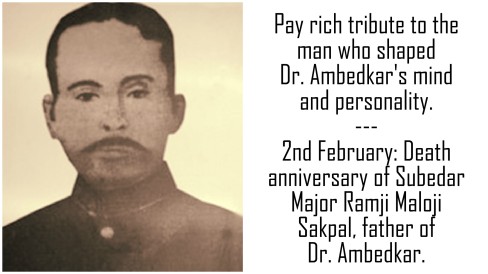 Ramji Sakpal retired in 1894 and the family moved from Dapoli to Satara two years later. Shortly after their move, Bhimrao’s mother (Bhima Bai) died. After the death of his wife Ramji married for the second time, which was opposed by Bhimrao. The children were cared for by their paternal aunt. However, Ramji did not curtail the ambition of Bhimrao towards his education. Ramji stood firm and committed to his children’s betterment and Bhimrao’s intellectual aspirations in particular.

During his stay at Bombay in 1904 in a one room tenement rented in the Improvement Trust Chawals at Parel, Ramji took utmost care of Dr. Ambedkar in particular. He would ask his son to go to bed early and he himself would work till 2 ‘o’ clock in the morning and go to bed after awakening his son for study. Under his father’s guidance Bhimrao gained experience in translation work. Bhimrao’s knowledge of English language was good compared to his class mates, courtesy his father’s interest in the language. Bhimrao‘s desire to posses books was insatiable which was supported by his noble father. Ramji ungrudgingly supplied Bhimrao with new books often borrowing money from his two married daughters at times even pawning their ornaments, which he had given as marriage gifts and redeeming them after he received monthly pension which was a meager sum of Rupees fifty.

Ramji was able to secure a sum of Rupees twenty five per month through Keluskar guruji (teacher of Bhimrao) from Maharaja of Baroda Sri Sayajirao Gaekwad. Maharaja had sanctioned this amount after satisfying himself about Bhimrao in an interview with him. Bhimrao, after passing his B A examination in 1912, entered the service of Baroda state in January 1913 as Lieutenant in the Baroda State Forces. Dr. Ambedkar received a telegram informing him that his father was seriously ill in Bombay. He left Baroda immediately to look after the health of his father. On his way home he got down at Surat station to buy sweet-meats for his father and missed his train. Next day when he reached Bombay he stood aghast at the sight of his sinking father. The sinking but searching eyes of the dying man moved on to his darling son upon whom he had revolved his thoughts, his hopes, and his existence. He moved his feeble hand over his son’s back and the next moment death-rattle was in his throat. His eyes closed and his legs and hands became motionless. He breathed his last. So great was the outburst of Bhimrao’s sorrow that words of consolation failed to soothe his heart and his loud lamentations drowned the wails of the members of his family. It was 02 February 1913,the saddest day in Bhimrao Ambedkar’s life.

Thus passed away an untouchable, Subhedar Major Ramji Maloji Sakpal, who was till the end of his life industrious, abstemious, devotional and aspiring. He died ripe in age but poor in wealth, for he had run into debt; but was exemplary in character and unconscious of his great legacy of his clan, country and humanity. Having infused in his son strength of will to resist worldly temptations and a depth of spirituality very seldom found in his son’s contemporaries, he left him behind to fight the battle of life and to break the world to his way.

Right from Bhimrao’s school days which started at Dappoli till he completed his B A degree, Ramji had stood as an inspiring angel. Ramji was responsible to shape the mind and personality of Bhimaro. Ramji was like a Sculptor carving out with patience, devotion and dedication of Bhimrao. The road showed by Ramji helped Bhimrao to get himself educated in foreign countries and develop ideas which were to make him the Liberator of the oppressed. Rightly, Dr. Ambedkar had dedicated his book, ‘The problem of the Rupee’ to the memory of his father and mother as a token of his abiding gratitude for the sacrifices they made and the enlightenment they showed in the matter of his education.

Dr. Mukund Rao Ambedkar was the nephew of Dr. B R Ambedkar.