2. “Education is something which ought to be brought within the reach of every one..the policy therefore ought to be to make higher education as cheap to the lower classes as it can possibly be made. If all these communities are to be brought to the level of equality, then the only remedy is to adopt the principle of equality and to give favoured treatment to those who are below level.”

4. To deny them that right (i.e. Education) is to create a situation full of injustice. To keep people illiterate and then to make their literacy the ground of their enfranchisement is to add insult to the injury. But the situation indeed involves more than this. It involves an aggravation of the injury for to keep illiterate and then to deny them franchise which is the only means where by they could effectively provide for the removal of illiteracy is to perpetuate illiteracy and postpone indefinitely the days of their enfranchisement.

Aim and functions of University Education

The aim and functions of University Education should be to see that the teaching carried on there is suited to adults; that it is scientific, detached and impartial in character; that it aims not so much at filling the mind of the student with facts or theories as at calling forth his own individuality, and stimulating him to mental effort; that it accustoms him to the critical study of the leading authorities, with perhaps, occasional reference to first hand sources of information, and that it implants in his mind a standard of toughness, and gives him a sense of the difficulty as well as the value of reaching at truth.”
W. & S. Vol. 2-p-296 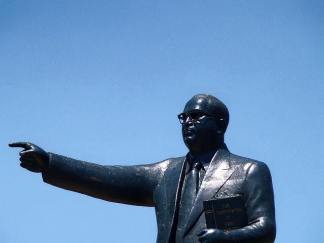 The student so trained should learn to distinguish between what may fairly be called matter of fact and what is certainly mere matter of opinion. He should be accustomed to distinguish issues, and to look at separate questions each on its own merits and without an eye to their bearings on some cherished theory. He should learn to state fairly, and even sympathetically the position of those to whose practical conclusions he is most stoutly opposed. He should become able to examine a suggested idea, and see what comes of it, before accepting it or rejecting it. Without necessarily becoming an original student he should gain an insight into the conditions under which original research is carried on. He should be able to weigh evidence, to follow and criticize argument and put his own value on authorities.” W. & S. Vol. 2-p-296 297

Character is more important than education

“Spread of education should be a proper function of the University. But this cannot be achieved unless the University adopts vernacular as the medium of instruction, which in the present circumstances is a far cry…
I hold a very strong affirmative view on the use of vernacular as a medium of instruction. But I feel that the problem cannot be solved unless Indian public opinion decides which vernacular it selects for common intercourse.”
* W. & S. Vol. 2-p-312

Proposal for study of law immediately after the matriculation

“I see three distinct advantages in my proposal of allowing a student to commence the study of law immediately after the matriculation.

1.) The first advantage to which I attach the greatest value is this. At present, a student who joins the law course has not the fixed objective of studying law for the purpose of qualifying himself for the profession. He comes there merely for the purpose of adding one more string to his bow. It is his last refuge to which he may or may not go for shelter. Probably, he comes to the Law College because he is unemployed and does not know for the moment what to do. Due to this unsteadiness in purpose, there is no seriousness in the law student and that is why his study of law is so haphazard. It is, therefore, necessary to compel him to stick to it. A boy, who is a B.A., cannot have this fixity of purpose, because as a BA. he has other opportunities in life open to him. My scheme has the advantage of compelling the boy to make his choice at the earliest stage at which every one in this country is required to make a choice of his career.

2.) The second advantage of my proposal lies in its combination of economy and efficiency. A boy will be able to complete his legal education within 4 years. This is a saving of two years over the present system. The alternative suggestion also requires six years. From the standpoint of poorer students, it has no advantage over the present system. From the standpoint of training, I venture to say that the existing systems as well as the alternative suggested by the committee suffer in comparison with mine. The existing system allows only two years for the study, which is undoubtedly very inadequate. The alternative scheme allots three years. But my scheme provides four full years. From the standpoint of efficiency, it is, therefore, superior to both.

Higher education the panacea of our social troubles

“Coming as I do form the lowest order of the Hindu Society, I know what is the value of education. The problem of raising the lower order is deemed to be economic. This is a great mistake. The problem of raising the lower order in India is not to feed them, to cloth them and to make them serve the higher classes as the ancient ideal of this country. The problem of the lower order is to remove from them that inferiority complex which has stunted their growth and made them slaves to others, to create in them the consciousness of the significance of their lives for themselves and for the country, of which they have been cruelly robbed by the existing social order. Nothing can achieve this purpose except this spread of higher education this in my opinion the penacea of our social troubles.
*L.F.Y. – P-69

2 responses to “Dr. Ambedkar on Education”