Must Read 7 Poems of Namdeo Dhasal

From Golpitha, 1972
Man, You Should Explode

Man, you should explode
Yourself to bits to start with
Jive to a savage drum beat
Smoke hash, smoke ganja
Chew opium, bite lalpari
Guzzle country booze—if too broke,
Down a pint of the cheapest dalda
Stay tipsy day and night, stay tight round the clock
Cuss at one and all; swear by his mom’s twat, his sister’s cunt
Abuse him, slap him in the cheek, and pummel him…
Man, you should keep handy a Rampuri knife
A dagger, an axe, a sword, an iron rod, a hockey stick, a bamboo
You should carry acid bulbs and such things on you
You should be ready to carve out anybody’s innards without batting an eyelid
Commit murders and kill the sleeping ones
Turn humans into slaves; whip their arses with a lash
Cook your beans on their bleeding backsides
Rob your next-door neighbours, bust banks
Fuck the mothers of moneylenders and the stinking rich
Cut the throat of your own kith and kin by conning them; poison them, jinx them
You should hump anyone’s mother or sister anywhere you can
Engage your dick with every missy you can find, call nobody too old to be screwed
Call nobody too young, nobody too green to shag, lay them one and all
Perform gang rapes on stage in the public
Make whorehouses grow: live on a pimp’s cut: cut the women’s noses, tits
Make them ride naked on a donkey through the streets to shame them
Man, one should dig up roads, yank off bridges
One should topple down streetlights
Smash up police stations and railway stations
One should hurl grenades; one should drop hydrogen bombs to raze
Literary societies, schools, colleges, hospitals, airports
One should open the manholes of sewers and throw into them
Plato, Einstein, Archimedes, Socrates,
Marx, Ashoka, Hitler, Camus, Sartre, Kafka,
Baudelaire, Rimbaud, Ezra Pound, Hopkins, Goethe,
Dostoevsky, Mayakovsky, Maxim Gorky,
Edison, Madison, Kalidasa, Tukaram, Vyasa, Shakespeare, Jnaneshvar,
And keep them rotting there with all their words
One should hang to death the descendents of Jesus, the Paighamber, the Buddha, and Vishnu
One should crumble up temples, churches, mosques, sculptures, museums
One should blow with cannonballs all priests
And inscribe epigraphs with cloth soaked in their blood
Man, one should tear off all the pages of all the sacred books in the world
And give them to people for wiping shit off their arses when done
Remove sticks from anybody’s fence and go in there to shit and piss, and muck it up
Menstruate there, cough out phlegm, sneeze out goo
Choose what offends one’s sense of odour to wind up the show
Raise hell all over the place from up to down and in between
Man, you should drink human blood, eat spit roast human flesh, melt human fat and drink it
Smash the bones of your critics’ shanks on hard stone blocks to get their marrow
Wage class wars, caste wars, communal wars, party wars, crusades, world wars
One should become totally savage, ferocious, and primitive
One should become devil-may-care and create anarchy
Launch a campaign for not growing food, kill people all and sundry by starving them to death
Kill oneself too, let disease thrive, make all trees leafless
Take care that no bird ever sings, man, one should plan to die groaning and screaming in pain
Let all this grow into a tumour to fill the universe, balloon up
And burst at a nameless time to shrink
After this all those who survive should stop robbing anyone or making others their slaves
After this they should stop calling one another names white or black, Brahmin, Kshatriya, Vaishya, or Shudra;
Stop creating political parties, stop building property, stop committing
The crime of not recognising one’s kin, not recognising one’s mother or sister
One should regard the sky as one’s grandpa, the earth as one’s grandma
And coddled by them everybody should bask in mutual love
Man, one should act so bright as to make the Sun and the Moon seem pale
One should share each morsel of food with everyone else, one should compose a hymn
To humanity itself, man, man should sing only the song of man.

END_OF_DOCUMENT_TOKEN_TO_BE_REPLACED

He wrote many poems to inspire young generation.

I am giving my political poems in the hands of working class. Shouldn’t I hope that the downtrodden arise with renewed rage after reading my poem? Words are like bullets and not a pistol used in Diwali. They should be aimed at right place and used for friends. - Namdeo Dhasal 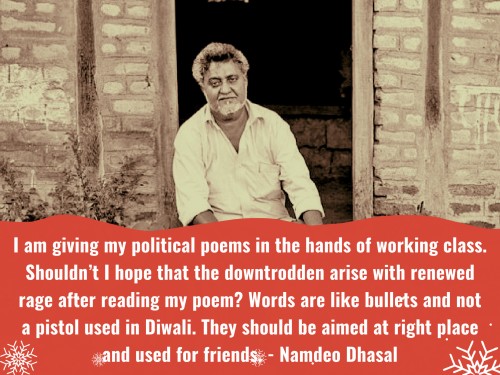 At the meeting organised on 9th July 1972 by Dalit youths at Siddharth Vihar, Bombay, the Dalit Panther formally came into existence.

Read also – Siddharth Vihar is gone. And with it, an important piece of Dalit history

The dominant Maratha caste, in Maharasthra had tightened its grip on important economic centers in rural agriculture – such as land development, banks, marketing federation, sugar factories – in the name of the co-operative movement. The movement was backed by the State.

This changed economic picture brought further misery to the dalits in the villages. The rich farmers and the bureaucracy controlled by them initiated a series of atrocities on the dalits. Untouchable, landless dalit labour fell prey to these atrocities. So did the worker in the dalit moevemnt, who raised his voice against them.

In cities and towns, the numbers of unemployed youth were increasing in droves aw a result of the capitalist system./ With the spread of education in the rural areas, there began to develop a class of educated dalit youth, who had hitherto been kept away from the local economic and political system. Their association with workers of the leftist movements in rural areas gave them the ability to understand the entire system.

In Bombay, Baburao Bagul and is young Dalit writer friends Daya Pawar, Arjun Dangle, Namdeo Dhasal, J.V. Pawar, Umakant Randhir, Ramdas Sorte and Prahlad Chendwankar met and had discussions for hours. The young generation was influenced by Baburao Bagul who had personally participated in the movement of dalit laboureres and who expressed himself clearly and logically.

The inaction of all factions of the Republican Party against the social injustice was conspicuous. Except for support by one or two from the party, the other leftist parties were indifferent.

Dalit writers began to realize more and ore that there was no point in merely writing provocative poetry against the injustice They had become familiar with the Black movement and literature in the U.S.A. and were greatly attracted to it.

The result was that youths Namdeo Dhasal, Arjun Dangle and J.V. Pawar took the initative and established the Dalit Panterhs in Bombay (presently Mumbai). The Dalit Panter movement was formed under the leadership of Raja Dhale as president, Namdev Dhasal as defense minister and J V Pawar as its general secretary. The Panthers observed Independence Day that year, which incidentally was the silver jubilee of Independence, as Black day and black-flag demonstrations were held at various places in Bombay. To protect their fellow dalits from violence and atrocities, they were prepared, if necessary to adopt violent strategies. Thus they chose to directly confront the oppressors.

The Dalit Panthers, embellishing the concept of dalits emancipation in their manifesto emphasized that a complete revolution was needed. ‘We do not want a little place in the brahmin alley. We want the rule of the whole land, we are not looking at persons but at systems and change of heart, liberal education etc, will not end out state of exploitation. When we gather a revolutionary mass, rouse the people out of the struggle, the giant mass will become tidal wave’ The Dalit Panthers recognized the contribution of Mahatma Jyotiba Phule and Dr. Babasaheb Ambedkar.

The dalits of Maharashtra got acquainted with the Panthers and the discontent of several years began to explode.

The Dalit Panthers was a social organization founded by Namdeo Dhasal, Raja Dhale, and Arun Kamble in April 1972 in Mumbai. Formed in the state of Maharashtra in the 1970s, they ideologically aligned themselves to the Black Panther movement in the United States.

During the same period, Dalit literature, painting, and theater challenged the very premise and nature of established art forms and their depiction of society and religion. Many of these new Dalit artists formed the first generation of the Dalit Panther movement that sought to wage an organized struggle against the varna system. Dalit Panthers visited “atrocity” sites, organized marches and rallies in villages, and raised slogans of direct militant action against their upper-caste aggressors.

The Dalit Panthers’ Manifesto defines Dalits as “all those who are exploited politically, economically and in the name of religion.” They classified “American imperialism” in the same category as “Hindu feudalism”; with both being examples of caste hierarchy. They also asserted that while Hindu feudalism may have spawned caste inequality, its extension by the modern Indian state had created an oppression “a hundred times more ruthless.”

Their firm stance and rallying message across Maharastra made their members frequent targets of state surveillance and brutality. Their legacy lives on in states across India, including in Tamil Nadu’s VCK Dalit Panthers Political party. Read their manifesto from here.

15th January in Dalit History – Death anniversary of Namdeo Dhasal, a founder of the Dalit Panthers

Namdeo Dhasal, a founder of the Dalit Panthers and a revolutionary poet, died on January 15, 2014..   He will be missed by all those dedicated to the revolutionary anti-caste movement.  For a time the Dalit Panthers symbolized the rebellious aspirations of a generation of Dalit youth.  Dhasal’s poetry was militant and hardhitting; Golpitha, his first collection, was named after a red-light district in Mumbai.  Golpitha’s language reflected the raw realism of that milieu.  “Poetry is politics,” said Dhasal, and he acted accordingly, 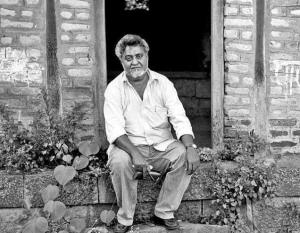 Political splits occurred in the Panther movement, but the spirit continued.  His poem “Kamatipura” (from Golpitha) is given below:

Man’s lost his speech
His god’s a shitting skeleton
Will this void ever find a voice, become a voice?

If you wish, keep an iron eye on it to watch
If there’s a tear in it, freeze it and save it too
Just looking at its alluring form, one goes berserk
The porcupine wakes up with a start
Attacks you with its sharp aroused bristles
Wounds you all over, through and through
As the night gets ready for its bridegroom, wounds begin to blossom
Unending oceans of flowers roll out
Peacocks continually dance and mate

Shed your skin, shed your skin from its very roots
Skin yourself
Let these poisoned everlasting wombs become disembodied.
Let not this numbed ball of flesh sprout limbs
Taste this
Potassium cyanide!
As you die at the infinitesimal fraction of a second,
Write down the small ‘s’ that’s being forever lowered.

Here queue up they who want to taste
Poison’s sweet or salt flavour
Death gathers here, as do words,
In just a minute, it will start pouring here.

O Kamatipura,
Tucking all seasons under your armpit
You squat in the mud here
I go beyond all the pleasures and pains of whoring and wait
For your lotus to bloom.
— A lotus in the mud.

This raw “poetry of the underworld” is the heritage of Namdeo Dhasal.

By – Gail Omvedt and originally posted at here.