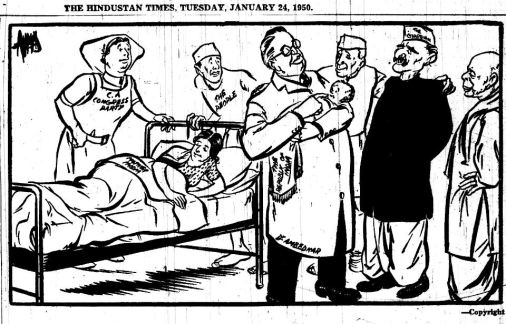 This Cartoon, which was published in the year 1950, on 24th January, that is two days before the first Indian Republic day, in The Hindustan Times, drawn by the famous Cartoonist Enver Ahmed . Cartoon showing Mother India giving birth to a baby called The Republic of India and DOCTOR Ambedkar holding that baby in his hands and giving a gentle touch, while the other characters in the background (from Left to Right ) Constituent Assembly congress Party as Nurse, t he people, Jawaharlal Nehru , Babu Rajendra Prasad and Vallabhai Patel all of them are looking at the newly born baby with great anxiety .

Dr. B. R. Ambedkar among other dignitaries at India’s first Republic Day parade.

Watch also – What US President Barack Obama said on Dr B R Ambedkar?