REFORMED! So, it means whosoever follows Babasaheb’s Ideology needs “reformation”! What kind of ‘reforms’ he needed? Reforms that he stops following Babasaheb? ‪Such a sick mentality of AAP leaders!

REFORMED? Was he a criminal who needed to be REFORMED? What is the intention of AAP to blame Rohith? All this shows the casteist mindset of AAP leaders. What about VC of UoH and ABVP and BJP leaders who killed him, what AAP has to say on that? Don’t they need to be reformed or AAP will protect them as they are also from Brahmin-Baina community?

Rohith had the problem of endearing Ambedkarism. That’s why Brahmin-Baina party – Aam Aadmi Party – is speaking about ‘REFORM’? They don’t want you to take inspiration from Babasaheb and fight against their upper caste hegemony. It hurts them since the times of Manu that Dalits should not question their superiority. Remember almost same is written in Manusmriti also. AAP is doing nothing but following Manusmriti.

Read below what Dr. Ambedkar had said almost 90 years ago and then read what Aam Aadmi Party is saying today on its twitter that Rohith needed ‘reformation’. Nothing has changed in last 90 years, mindset of so called upper castes is same. Still they think the problem is with Dalits and Dalits need to be REFORMED.

Read what Dr. Ambedkar had said –

A perpetual war is going on every-day in every village between the Hindus and the Untouchables. —Dr. B. R. Ambedkar

Mirchpur, a village in district Hissar of Haryana. On the morning of 21 April, 2010, 18 Dalit homes were torched and 2 Dalits—17-year old Suman and her 60-year old father Tara Chand—were burnt alive. It was pre-planned attack on the Dalits by Jat community and police didn’t help Dalits at all. Khap panchayats supported Jats that led Dalits to leave the villages. 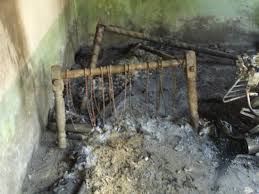 On 24th September, 2011 Delhi court held only 15 of the 97 people guilty of various criminal acts. It is shameful that rest of the people got away without any punishment. Justice was denied to Dalits once again.

Read more about the incident from here, here and here.

Watch a short documentary on the same incident.