The University Grants Commission annually allots only 11 per cent of the total money it gets under the SC and ST sub plans on scholarships and fellowships, which directly benefits the students of these marginalised communities.

A major chunk of the total money, around 60 per cent, was spent on building “capital assets” which are not specifically beneficial for SC or ST students, like construction of hostels or buying computers. 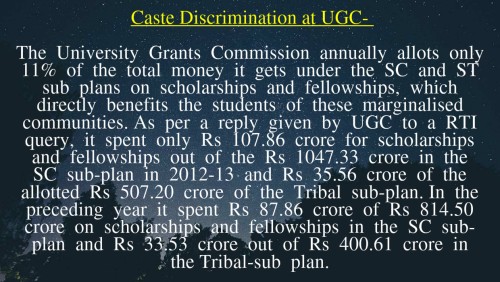 For this reason the UGC has come under fire from Dalit rights organizations.

Mr Paul Divakar, general secretary of National Campaign on Dalit Human Rights, which filed the RTI said, “This is not an issue which pertains just to the UGC. Ineffective spending and diversion of funds meant for SC and ST development exists in many well known institutions like the IITs, IIMs and ICSSR. This is just another form of discrimination. We have complained about the UGC problem to the minister of HRD, Ms Smriti Irani and head of other government bodies, but to no avail. We are planning to approach the courts now.”

When contacted, former UGC chairman Mr Sukhdeo Thorat said, “The allocation of money should be increased for fellowships because it helps the students directly and will result in more Dalit scholars pursuing research. What is the point of allocating money meant under the sub-plans if students do not benefit from it directly?”

A much needed website (www.castediscrimination.com) has been launched by Dalits to record and highlight caste discrimination at educational institutions with the tagline of

One doesn’t need to stay silent now on the discrimination one is facing at the educational spaces. This website is one of its kind where one can report the caste discrimination. The website is another step toward raising voice against injustice and establishing equality in the society. Website’s aim and motto is –

…is an attempt to get real-time data of present and past instances of structural caste discrimination in higher education. Our hope is to track data that the Indian government has been lax in collecting but also to change the narrative from pathologizing Dalit Bahujan students to understanding how caste apartheid operates on our campuses.

Every new website, photo, article or anything that challenges the Brahminical hegemony is important for us and should be spread as much as possible. Please share this website with others so that no other Rohith faces discrimination in the hands of casteist people.

Don’t be silent and report the caste discrimination!

Here are a few more screen-shots of the website.