“The Chamcha Age (An Era of Stooges)” was written by Kanshi Ram, and published by him on 24th Sept. 1982 on the occasion of 50th anniversary of Poona Pact. It is dedicated to Mahatma Jyotirao Phule, “whose initiation of cultural revolt in colonial India, later taken up by Babasaheb Dr. B. R. Ambedkar, Periyar E.V.Ramaswamy and many other rebellious spirits brought us to this level where we are thinking, planning and struggling to put an end to the ‘Chamcha Age’ and usher in ‘Bright Age’ for the Shudras and the Ati-Shudras.”

In preface he says Chamcha Age started from the Poona Pact giving Joint Electorates instead of Separate Electorates. The purpose of book is to make Dalit Soshit Samaj of the existence of Chamchas or stooges, and to awaken masses how to differentiate between genuine and counterfeit leadership. 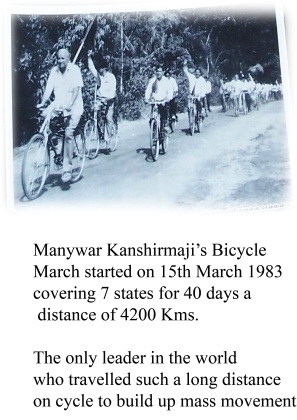 The book is divided into 4 parts and 17 chapters. The first two parts give information about past struggles, part III depicts present situation and part IV suggests ways and means of future struggle.

A Chamcha is an indigenous word for a stooge, or a tool, or an agent, who is operated by others for their own benefit. Gandhiji felt necessity of Chamchas from 1939-32 onwards. A Chamcha is created to oppose the real fighter, the genuine leader. While Dr. Ambedkar was taking the untouchables of India from Dark Age to Bright Age, they slipped aside into Chamcha Age. Gandhiji preferred two Chamchas through joint electorate against one real representative through separate electorate.

Part IV of the Book is titled “The Way Out”, has 6 Chapters: It mostly outlines the struggle that is necessary to fight Brahmanism. It has not only historical importance to understand Kanshiram’s struggle, but also can enlighten us what is to be done in future. It describes Dr. Ambedkar’s concept of Educate, Agitate, Organise. Separate Settlements, Denunciation of Poona pact, and also his three attempts to make the movement broad based, giving the excerpts from Baba Saheb’s famous speech at S.C.Conference at Lucknow on 25.4.1948. Below reproduced is the entire Part IV, which is the main Part, for future guidance. Hope it serves some useful purpose for those who are rather nonconversant with Kanshiram’s philosophy.

Ambedkar could anticipate
“Things will be much worse under the system of joint electorates and reserved seats which will hereafter become operative under the terms of the Poona Pact. This is no more speculation. The last election (1946) has conclusively proved that the Scheduled Castes can be completely disfranchised in a joint electorate.” [Dr.B.R. Ambedkar.]

The joint electorate is from the point of the Hindus to use a familiar phrase a “rotten borough” in which the Hindus get the right to nominate an untouchable to set nominally as a representative of the untouchable but really as a tool of the Hindu.” [Dr.B.R.Ambedkar.]

From the above two quotations, it is abundantly clear that Baba Saheb Ambedkar could clearly anticipate the outcome of the Poona Pact. Being a constitutional expert and a democrat, he could well imagine the fact of the disfranchised people in a democracy based on adult franchise. He could also anticipate4e the fate of the people whose representatives were not real representatives, but mere tools in the hand of their age-old enemies. It was the helplessness of his people at that time that forced him to sign the Poona-Pact under the coercive effects of Gandhiji’s fast. At that time, he must have thought of the times when the depressed classes would be less helpless to take up the challenge and fight for their due. At any rate, he was there with us for 24 years to fight the evil efforts of the Chamcha age.