Birsa was born in year 1875, Thursday was the day of his birth, and he was named after the day of his birth according to the Munda custom. Ulihatu was the birth-place of Sugna Munda, father of Birsa. The claim of Ulihatu rests on Birsa’ s elder brother Komta Munda living in the village and on his house, which still exist in a dilapidated condition. Birsa’s father, mother and younger brother, Pasna Munda, left Ulihatu and proceeded to Kurumbda near Birbanki in search of employment as laborers or crop-sharers (sajhadar) or riots. At Kurmbda Birsa’s elder brother, Komta, and his sister, Daskir, were born. From there the family moved to Bamba where Birsa’s elder sister Champa was born followed by himself Birsa was born in a house built of bamboo strips without a mud plaster or even a secure roof; a crop-sharer or riot could not boast of a better house. Folk songs relating to his birth seek to embroider the event with the Biblical parallels: a comet or a flag-star moved across the sky from Chalked to Ulihatu, a flag flew on a mountain top. Soon after Birsa’s birth, his family left Bamba. A quarrel between the Mundas and their riots in which his father was involved as a witness was the immediate reason for proceeding to Chalkad, Sugana’s mother’s village, where Bir Singh, the Munda of the village, granted them refuge. Folklore refers to his rolling and playing in sand and dust with his friends, and his growing up strong and handsome in looks he grazed sheep in the forest of Bohonda. When the grew up, he shared an interest in playing the flute, in which he became adept, and so movingly did he play that all living beings came out to listen to him. He went round with the tuila, the one-stringed instrument made from the pumpkin, in the hand and the flute strung to his waist. Exciting moments of his childhood were spent on the Akhara (the village dancing ground). One of his contemporaries who went out with him, however, heard him speak of strange things. Driven by poverty Birsa was taken to Ayubhatu, his maternal uncle’s village. Komta Munda, his eldest brother, who was ten years of age, went to Kundi Bartoli, entered the service of a “Munda, married and lived there for eight years, and then joined his father and younger brother at Chalkad. At Ayubhatu Birsa lived for two years. He went to school at Salga, run by one Jaipal Nag. He accompanied his mother’s younger sister, Joni, who was fond of horn. She was married, to Khatanga, her new home. He was found no good for the job and was beaten by the owner of field. He left the village and went to his brother at Kundi Bartoli, and stayed with him for sometime. From there he probably went to the German mission at Burju where he passed the lower primary examination.Birsa Munda as known amongst tribal, waged a massive war against the British rule in mid 1890’s. After the (suppression of the first rising, in decisive war against the British). After a series of concerted attacks for nearly two years on the places loyal to the British, the Munda warriors started congregating on “Dombari Hill” at village “Sail, Rakab” (Nearly 20 Km from the Ranchi-Jamshedpur Highway), on the call of Birsa. Documents revel that the Munda’s, adopting Guerilla warfare, attack the British in Ranchi and Khunti. Several persons, mostly police men were killed and nearly 100 Buildings were set on fire. It raised over this ” UlguIan ” (revolt), the, then commissioner Mr. A fobes and Deputy Commissioner Mr. H.C.Stratified, rushed to Kunti with two company of army to crush the mass struggle (UlguIan) of” Abua Disun” ( Self rule).The revolt had rocked the British administration to the extent that the commissioner declared a reward of Rs. 500 for the arrest of Birsa. Subsequently British forces attacked heavily on Munda warriors congregated at “Dumbari Hill” and made indiscriminate firing like that of “Jaliyan Wala Bagh” and killed several hundred people. The whole hill was littered with dead human corpses. After Brutal slaughter the dead bodies were thrown into the deep gorges and ravines of the hill. Many of the wounded were buried alive. According to editorial published on March 25, 1900, the statesman, put the toll at 400. However, the then administration suppressed the fact and claimed that only eleven persons were killed and nine injured in two firings on January 7 and January 9, 1900. Fear and panic show spread over the area that “Dombari” was named by Munda’s as “Topped Buru” -mound of dead.

END_OF_DOCUMENT_TOKEN_TO_BE_REPLACED 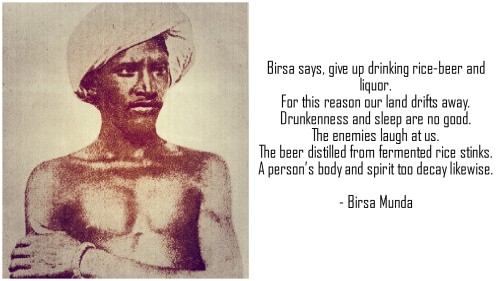 Birsa says, give up drinking rice-beer and liquor.
For this reason our land drifts away.
Drunkenness and sleep are no good.
The enemies laugh at us.
The beer distilled from fermented rice stinks.
A person’s body and spirit too decay likewise.