What is the nature of #DalitMuslimUnity?

This is in response to an article by Adv. Md. Karim (DV.June 1- 15, 97). It was a great misfortune that Dr. Ambedkar and Br. Jinnah could not work together, Adv. Karim says. He says Azad was a stooge. He says the anti Muslim activities are a symptoms and not a disease. He says Muslims are not a minority. He believes that population of Muslims could be more than presumed 15 percent. He also quotes authorities to show that Islam is an egalitarian religion. All this need not refuted and any Bahujan can agree with all these points. He avers that Muslim masses in India are in a need of allies to fight the existing system under the guidance of Islam He advises his Muslim brothers to help the Dalits in all spheres, and keep good contacts for future interaction. This is quite correct. But the main point is, what kind of unity is sought for. He says:

“The future of India lies in the unity of Dalits and Muslims – not under the banner of this party or that because no party is aiming at providing an alternative to the existing social, political and economic setup but under the invigorating and revolutionary message of Islam …”

Why no political party is thought to be neccesary? Is it an invitation for the Bahujans to adopt Islam? Is it a proletising work? If it is, well and good; nothing wrong in that; only that perhaps DV is not a forum for it. 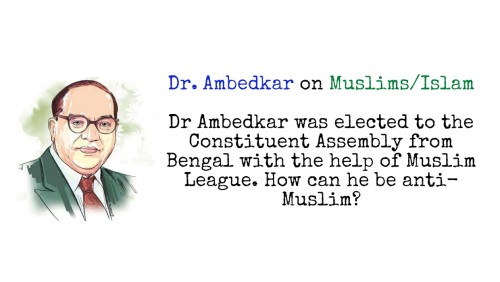 Our experience of mixing religion with politics is always counter productive. The combination does neither promote the religion nor the politics. The political meetings of RPI used to start with Buddhist prayers, the non Buddhists in the party, gradually, faded away. The religious sermons to Budhists used to end with request for support to RPI work, the non-RPI Buddhists stopped coming. I feel the two must not be combined, the religion and politics. I hope Adv. Karim does not wish to propagate religion from political platform.

What is the spirit of Islam

Do the Muslims consider Dalits as non-hindus? I think, it is the first neccesity that they must make a distinction between “Hindus” and Dalits. Dalit leaders have time and again declared that. Leaders of all Dalit parties, of all shades and colours. But Muslim leaders do not think about this. I think this is the main hurdle.

No doubt, Islam is a great religion. Also it can not be gainsaid that meeting of Ambedkar and Jinnah could not bear fruits. If the unity has to bear any fruits, today, it has got to be based on secular points. The basis has to be non-religious. It should be purely on political ideology. What is that ideology? I believe, that ideology could only be Ambedkarism. Our Muslim brothers have got to get themselves aquainted with Spirit of Ambedkarism, which is different from Spirit of Buddhism

“When Hindus and Muslims fight among themselves, the Untouchables tend to incline towards Muslims. They feel, they would be benefited if they develop friendship with Muslims. But Untouchables should keep in mind that it is not all that true as it appears and so they should be very careful. What I expereinced at the time of Sarada Act about the Muslim policy, can not called satisfactory. I got first severe jolt when I found that almost all the Muslims got ready to oppose the essential Act like Sarda Act along with the obsolete and puranic, fundamentalists and revivalist orthodox Hindus. And at the time of Round Table Conference, I got second experience now that their attitude can be how narrow and retrograde, like that of sanatani orthodox Hindus. A special telegram from the Brahmin President of Varnashram Brahman Sangha was received recently by a Muslim delegate, Mr. Gazanavi. It was a message that Muslims should cooperate with orthodox Hindus in opposing the Untouchables temple entry movement. It was also suggested that, if India gets freedom, it would be dangerous to the religion of both Hindus as well as Muslims, and so the religious Muslims should be careful about the swaraj like religious Hindus. The sanatani brahmins also requested Mr. Gaznabi to put forward the side of sanatani Hindus by the Muslim delegates in the RTC! Thus, it could be said that these arthodox brahmins have materialised the proverb that ‘we are orhtodox brahmins and our relatives are muslims’. Mr.Gazanabi has published this telegram in ‘Times’ here. The fact, that the orthodox Bengali Muslim like Mr. Gaznabe should be entrusted the job of preserving the religion of Hindus, by the orthodox Hindus, and that he should accept it, should be borne in mind by all the reformists in India. It is an execlent example of how an orthodox sanatani Hindu is ready to pray even an ‘yavan’ or a ‘mlenchha’ when he finds the life of his ‘dharma’ is in danger (from untouchables). And the ‘dharma’ of Hindus is such a provokative (vigna-santoshi) one, that whenever any thing new happens, or due to time any change takes place in traditional customms, they shout that, dharm’ is in danger. Just like a sanatani Hindu, the Indian Muslim also is a strange object. He is averse to all social reforms. His corelegionists outside India have turned to be social revolutionaries. A Muslim patriot like Kemal Pasha has quashed all customs and traditions which are hurdles against the progress of nation and human life. I have great respect and affinity for Kemal Pasha. But the Indian Muslims, even the patriots and nationalists like Shaukat Ali, do not like Kemal Pasha and Amanullah. Because they are reformists, and in the eyes of a Indian Muslim, reform is a sacrilege.”