Challenges faced by Dr. Ambedkar to write the Constitution of India

Indians today are governed by two different ideologies. Their political ideal set in the preamble of the Constitution affirms a life of liberty, equality and fraternity. Their social ideal embodied in their religion denies them. ~Dr. B.R. Ambedkar

Every year on 26 January, we celebrate Constitution Day, also known as Samvidhan Divas, in India in honor of Dr. Bhimrao Ramji Ambedkar, the Architect of the Indian constitution. 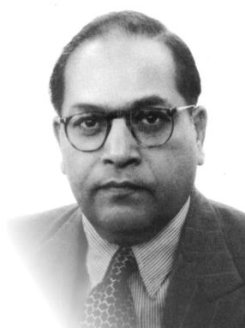 India obtained independence on 15 August 1947 as a constitutional monarchy with George VI as Head of State and the Earl of Mountbatten as its Governor-General. The country, though, did not yet had a constitution; instead, its laws were based on the modified colonial Government of India Act of 1935. On 29 August 1947, a resolution was passed by the Constituent Assembly to appoint a Drafting Committee with seven members, including Dr. Ambedkar, for preparing a draft of the Constitution of independent India. It is said that when Pandit Jawaharlal Nehru and Sardar Vallabhbhai Patel asked Sir Guor Jennings, an internationally-known constitutional expert of that time to draft the Constitution of India, he responded, “Why are you looking outside of India when you have within India an outstanding legal and constitutional expert in Dr. Ambedkar who ought to be entrusted with the role which you so badly need and which he so richly and rightly deserves?”

Then Law Minister Dr. Ambedkar was appointed the Chairman of the Drafting Committee on 28 August 1947 because of his educational qualifications and deep knowledge, great command of the English language, and expertise in articulating the subject. Other members of the Drafting Committee were N. Goipalswami, Alladi Krishnaswami Ayyas, K.M. Munshi, Saijio Mola Saadulla, N. Madhava Rao and D.P. Khaitan.

The Indian democracy has 4 pillars: the Legislature to make, amend and repeal the laws; the Executive to implement, execute and administer the laws; the Judiciary to interpret and enforce the laws and to administer justice; and the Media to inform the people about the working of their government.

Mr. Churchill and Viscount Simon. Mr. Churchill observed that the Assembly, as it was meeting then, represented “only one major community in India”. Viscount Simon was more specific and referred to the Assembly as “a body of Hindus”. He went on further to ask “whether this meeting of Caste Hindus at Delhi can be regarded by the Government as the Constituent Assembly they meant at all”.

The Constituent Assembly inaugural session started at 11AM with the introduction of Dr. Sachchidananda Sinha, the temporary Chairman of the Assembly. Dr. Sachdhidananda Sinha was the first President of the Constituent Assembly. All-India Radio of Delhi broadcast a composite sound picture of the entire proceedings. All over the world, countries sent goodwill messages to India for the framing of the Constitution, and it was read by Mr. Sinha. After the Chairman’s inaugural address and the nomination of a Deputy Chairman, the members were formally requested to present their credentials. The First Day’s proceedings ended after all the 207 members present submitted their credentials and signed the Register. After the partition of India, Dr. Rajendra Prasad was elected as the Chairman of the Constituent Assembly.

Difficulty of Writing the Constitution of India

In India, caste discrimination is enforced by a caste system that is practiced in the name of God. It is difficult to make a Constitution for a people who believe in such a corrupt god, but Dr. Ambedkar did it. He wrote the Constitution based on Buddhism. Gautama Buddha was the first person in the history of mankind who has given the message of Love, Compassion, Liberty, Equality, Fraternity, and Justice. Dr Ambedkar is called the Architect of India because he broke the caste system in the Constitution and gave equal rights to all Indians.

The Constitution Drafting Committee meetings lasted 114 days. Dr. Ambedkar worked on his draft for an additional two years, 11 months, and 18 days. He incurred 63 lakh, 96 thousand, 729 rupees in direct expenses. He responded to a total of 7635 notices regarding the framing of the Constitution. It was not easy to write the Constitution in a way that took into account the many religious groups so that all of the people would agree on the rules and laws. Dr. Ambedkar studied the minds and religions of all Indians. He was a visionary who wrote a Constitution that continues to serve us all beautifully even after 60 years.

Abuse of the Constitution

Babasaheb Dr. Ambedkar was very sensitive and aware about the rights of minorities and backward people of this country. The Indian Constitution is based on “Justice, Equality and Fraternity.” The opening words of the Constitution of India are “We the People of India.” In a speech delivered in Siddharth College Bombay, Dr. Ambedkar said, “The idea of making a gift of fundamental rights to every individual is no doubt very laudable. The question is how to make them effective.” The prevalent view is that once the rights are enacted in law, then they are safeguarded. But as experience has proven, rights are protected not by law but by the social and moral conscience of the society. Conscience is the only safeguard of all rights.

Why do we see only Brahmins at higher posts in all Departments in all corners of India: Supreme Court, high courts, theater/cinema, IT firms and even in parliament? You can easily find the Brahmin at higher levels in all sectors. Why is this happening when the Constitution has guaranteed equality for all religions, castes, creeds and races of people? Why is there no growth in inclusiveness in this country? Why, after equality was granted in the Constitution, is there inequality everywhere?

Our Indian Constitution promises the Indian people that our society and Nation is based on Liberty, Equality, Fraternity and Justice. The people who comprised the Constituent Assembly came from different religions and belief systems. The promises given in the Constitution were given in common to all the people. Even the oppressed classes and people who were poor accepted and believed that change would come through the Constitution.

When the Constitution was ratified on 26 January 1950, it was announced that independent India would be governed on the basis of Liberty, Equality, Fraternity and Justice. This was meant to give relief to the poor who were oppressed and abandoned by the higher castes. They were happy that soon their good days would come. These things were meant to give happiness to people of all religions of India.

In 1952, India held its first Parliamentary election, and all four pillars were captured by the Brahmins. Forty-seven percent of those elected to Parliament were Brahmins. The Indian independence movement was not meant to deliver the Parliament of India to the Brahmins. The four pillars of society were not fairly won – they were captured. Sixty percent of the ballots had been given to three percent of the people by Jawaharlal Nehru. So when we say we want to save our Constitution, we mean that there is a plan in place that is working to destroy our Constitution. Many people do not understand this conspiracy. If there were not a conspiracy, then there would be no need to talk about saving our Constitution. The people who are talking about making India a Hindu nation would give all rights to Brahmins in the name of Hindu.

It is a painful thing to witness for those who framed the Constitution. None of them guessed this thing would happen. Nobody believed this thing could happen in independent India. But it did happen and has been happening and is still happening to this day.

Man of the Millennium

In 1990, the Bharat Ratna, India’s highest civilian award, was conferred upon Babasaheb Dr. Bhimrao Ramji Ambedkar. Pandit Jawaharlal Nehru said, “Dr. B.R. Ambedkar is the architect of the Indian Constitution. The new Constitution is the result because of his hard work. His name shall be written in golden letters in history. He is a legend. Dr. Ambedkar’s name will always be associated with the Constitution of India and the existence of India as a nation.”