Justin Trudeau, Canada’s Prime Minister, on 11th April 2016 said, “next month, I will rise in the House to offer an apology to Sikhs for the Komagata Maru incident.” Komagata Maru was ship that sailed from Hong Kong to Vancouver in 1914, carrying 376 people, mostly Sikhs, were denied entry to Canada. Ship had to return to Calcutta, where a few people were shot dead by British and rest were jailed.

World War – I ended in November 1918 and people from Punjab who fought in that war (mostly from lower castes) came back to homes. They decided to pay homage, say thanks, offer prayers at Golden Temple, Amritsar for keeping them alive at World War-I. These lower caste people were stopped by Sikh Jathedars (clergy) from entering the Golden Temple.

As described by Dalit writer, Gurnam Singh Muktsar, to protest this inhuman behavior and not letting lower castes to enter Golden Temple, lower castes (Dalits) decided to gather at Jallianwala Bagh and stage a protest against caste discrimination.

Sikh Jathedars could not digest that Dalits organising protests for equal rights. At that time, head of Golden Temple was Giani Arur Singh, grandfather of Simranjit Singh Mann who is president of the Shiromani Akali Dal. 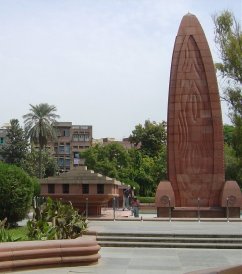 Later, Jathedar Arur Singh invited General O’Dwyer to Golden Temple and honored him not only with Siropa but also offered him Turban and Kirpan. Jathedars even declared him a true Sikh despite O’Dwyer being a smoker! (In Sikhism smoking isn’t allowed.)