Ajith Kumar (21) was studying second year B.E civil engineering in St.Joseph college of engineering, Pennalur village, Kanchipuram dist. He was the youngest son of Gnanamani (56) a daily wage laborer from Allur village, Sethiyathopu post, Cuddalore district. Ajith was staying in the St.Zavier men’s hostel inside the college campus. He was 200 kms away near Chennai from his native village. 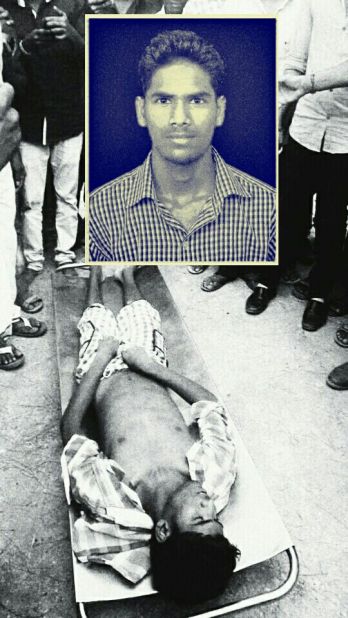 On 1.3.16 Ajith’s father Gnanamani received a phone call from the college management who complained about his son and asked him to take his son from the college. The next day Gnanamani visited the college along with his elder son Gunasekaran. The college management comprising the principal and two college administrators discussed the issue with them and asked to take Ajith out of college or pay a fine of Rs.5000. Initially Gnanamani protested that an investigation shouldn’t be done without his son present in the room. Later he accepted to pay the fine and asked for a week’s time since he couldn’t get the money immediately.

On the same day Gnanamani met his son Ajith in the hostel and enquired the complaint on him. Ajith informed that he haven’t done anything wrong and punished just for questioning the quality of food in hostel mess with the management. The father advised his son that these issues with food are normal in hostels and he need to adapt to them.

After few days Gnanamani received a call from his son Ajith, who said that he is afraid and the college management mainly administrator Fr. Jude are abusing him verbally in the classroom. Fr. Jude told Ajith ‘You Paraiyars are useless. You dogs are studying free of cost. Even if you get free education you still complain about rice and sambar? You should get lost and die’. Gnanamani asked his son to come home and he too responded positively. This whole abuse happened in front of the students inside the classroom and it was happening daily since his father visited the college. Fr. Jude is said to be always inspecting the hostel rooms, beating the students with mobile or laptop charger during those visits, abuse students verbally in classrooms and hostels.

On Feb 10 Vinoth Kumar, a computer science student was suspended by the college management. Vinoth was dragged out of the hostel and beaten up by Fr. Jude before sending him out for suspension. The other students were concerned and tried to report these violent behavior of Fr. Jude to the principal. When Fr. Jude found them standing outside principal’s office they were immediately suspended for 15 days. Ajith Kumar was one among the nine got suspended. Everyone was thrown out of the college & hostel. Ajith spent his suspension at home and came back. Initially he was denied entry into hostel and the casteist abuses started from that time.

On 7.3.16 – 11pm Gnanamani received a call from Ajith’s friends informing that his son has committed suicide by hanging in hostel room. The family rushed to the college immediately. They saw his body in Sriperumpudhur government hospital. On 8.3.16 morning Gnanamani filed a complaint with Sriperumpudhur police detailing the events and causes that led to his son’s mysterious death. In his complaint he demanded that postmortem to be done by experts and video-graphed. He named the college administration (college administrators, principal & hostel warden) and their casteist abuse as the reason for Ajith’s death. VCK Sriperumpudhur constituency secretary Menagadevi Komagan and party cadres assembled in the hospital. She assisted the family in dealing with the police. The police filed a normal case of suicide naming the college administration as suspects. Police refused the demand of VCK that the case to be filed under Atrocities act.

On the same day police took Ajith’s body to Kanchipuram government hospital and conducted postmortem without informing his parents. Kanchipuram town VCK leaders and other movements protested against conducting post mortem after 6 pm against the rules but police carried out anyway. Gnanamani immediately filed a petition before district collector demanding a re postmortem and the case tone filed under Atrocities act but the demands were refused.

The next day (9.3.16) on the instructions of VCK president Annan Thol.Thirumavalavan party’s general secretary Sinthanai Selvan joined the protest in Kanchipuram govt hospital. He submitted a petition to the administration detailing the issue and demands of the party which includes application of Atrocities act, immediate arrest of college management, protection & assurances for the protesting students from witch hunt, 20 lacs compensation for the family and finally a white paper on the deaths of students in institutions. The police refused to file cases under PoA and arrest the culprits with investigations still on. Opposing this VCK, Makkal Mandram and communist parties jointly led a road roko outside the hospital. Deputy collector of IAS rank met the protesters and assured them of proper investigation including arrests but we refused to accept the body till demands are met. Later that evening Ajith Kumar’s family thanked the protestors for their support and requested to get his body for a dignified funeral. VCK general secretary received the body, paid respects on behalf of the party and the family took it to the native, where funeral was done the next day (10.3.16). VCK has announced a protest on 16.3.16 along with parties in People’s Welfare Front.

This note was compiled based on Gnanamani’s police complaint, Ajith’s friends account and details collected by local party leaders. Till now the suicide case of Ajith Kumar is not filed under PoA and his killers remain free outside.