5 February 1951: Hindu Code bill was introduced in the Parliament

Following India’s independence Jawaharlal Nehru entrusted his first Law Minister Dr. Ambedkar, who belonged to the Scheduled Caste Federation, with the task of codifying the Hindu personal law as the first step towards a uniform civil code. Dr. Ambedkar formed a committee with himself as its chairperson. The other members were K Y Bhandarkar. G R Rajagopal of the Ministry of Law and S V Gupte of the Bombay Bar. The committee made only minor revisions to the draft that was presented to the Consituent Assembly in 1947 before Independence. But even before the bill could be put up to the Constituent Assembly (Legislative) some vocal sections of Hindu public opinion raised the bogey ‘Hinduism in danger’. Dr. Ambedkar and his team, however, was undaunted and continued with their efforts with all seriousness and presented the draft bill to Nehru’s cabinet, which unanimously approved it.  Emboldened by this exercise, on 5 February 1951 he introduced the bill to the Parliament. But to his utter surprise, many Hindu members, including some who had approved it in the cabinet earlier, now resisted it. Sardar Patel as the home minister and the Deputy Prime Minister, Syama Prasad Mookerjee as the industry minister who belonged to the Hindu Mahasabha, and Pandit Madan Mohan Malviya, a tradionalist Congressman, strongly opposed the bill. Pattabhi Sitaramayya, the Congress president, also opposed it, particularly keeping in view its negative impacts on Hindu votes in the election of 1951-52. Mookerjee said it would ’shatter the magnificent structure of Hindu culture and stultify a dynamic and catholic way of life that had wonderfully adapted itself to the changes for centuries’. Even women belonging to the Hindu Mahasabha came to the forefront to oppose the bill. Already a year ago, in a long letter to President Rajendra Prasad, Janakibai Joshi, the President of the All India Hindu Women’s Conference that belonged to the Hindu Mahasabha, had written on 4 February 1950 that any move to replace the concept of Hindu marriage as sacrament by making it contractual would destroy the entire family system of the Hindus. ‘The Hindu family should be taken as a unit and fragmentation of the property should not be allowed so as to go away to other family through daughter’. 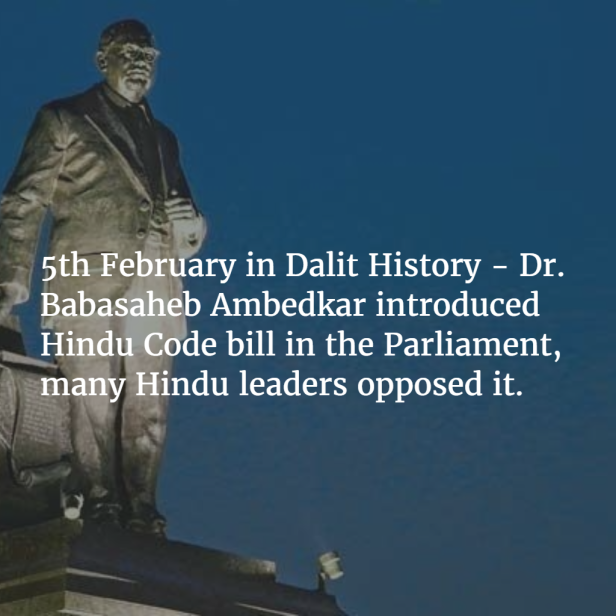 Malaviya declared that nothing should be done to ‘damage the Hindu system, which was enshrined in our scriptures’. Congressman Mukul Behrilal Bhargava opposed the bill on the grounds that it incorporated provisions of Christian and Muslim laws. Furthermore, Rajendra Prasad, the first president of the nation, threw his weight against the bill leading to its withdrawal in September 1951. In a letter to Patel, Rajendra Prasad wrote that ‘new concepts and new ideas are no only foreign to Hindu law but are susceptible of dividing every family’. He did not make such comments in public but privately campaigned against the bill by arguing that the provisional parliament had no authority on such critical matters. In utter disgust, Dr. Ambedkar resigned from the cabinet on 27 September 1951 because he felt that even Nehru, with all the political strength at his command, did not stand behind him. In a subsequent statement Dr. Ambedkar said: ‘I have never seen a case of chief whip so disloyal to the Prime Minister and the Prime Minister so loyal to a disloyal whip’. He lamented that Hindus were incapable of bringing in reforms in their archaic system. He accused them of creating such an atmosphere that even other communities would not be encouraged to reform themselves. Vasudha Dhagamwar writes” ‘The first round for the Uniform Civil Code had already been lost in the Constituent Assembly where, though no amendments to Article 35 [Article 44 of the Indian Constitution] were allowed, verbal assurances of the kind demanded by dissenting members had been given by Dr. Ambedkar. With his resignation the second round was lost, for the man who had a clear vision in matters legal and constitutional, had departed from the scene’

Nehru’s fortnightly letters to the chief ministers are replete with evidences of his commitment to the cause of having a uniform code of Hindu personal law. Although the major opposition to the idea had come from Hindu traditionalists, in the forefront of which was the RSS and the Anti-Hindu Code Committee, it was not confined to them alone. Some sections of the Sikh community too opposed it as Hindu law included that community as well. On 3 December 1950, addressing a meeting in Amritsar, Master Tara Singh accused the Congress of driving a wedge between the Hindus and the Sikhs.