Hardas Laxmanrao Nagrale (6th January 1904– 12th January 1939), popularly known as Babu L.N. Hardas.was a Dalit leader and social reformer in India. He was an ardent follower of Dr. Ambedkar and was pioneer of the practice of exchanging the greeting Jai Bhim amongst the Dalits. He was also a prominent labour leader in the Central Province and was the general secretary of the Independent Labour Party in the province. 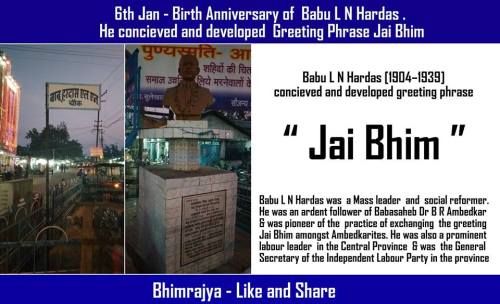 Babu Hardas started his social activities pretty early in his life. At the age of 17, he started a weekly Maharatha from Nagpur with a view of spreading social awareness in the Dalits. He tried to organize the Mahar community by founding the Mahar Samaj organization in 1922. He also formed one Mahar Samaj Pathak, a voluntary corps group, to organize the disorganized Mahar youth to protect the Dalits against the atrocities. He opened a Mahila Ashram in order to imparting training to Dalit women in daily activities. Also, in order to avoid exploitation of beedi workers, he started the beedi work on cooperative basis, which became very successful in the area.

Babu Hardas as a strong opponent of irrational and superstitious customs of the society. He strongly opposed to the sub-caste barriers amongst the depressed classes. He arranged community dinners and invited to all people of depressed classes divided in various sub-castes.

Babu Hardas was also a strong advocate of education to Dalits. He himself had completed matriculation, which was a rare thing for the Dalits in those days. He started night schools at Kamthi in 1927 at the behest of the Mahar community. There were 86 boys and 22 girls learning in his school at a time. He also started one Sant Chokhamela Library at Kamthi around the same time.

Babu Hardas was a prolific writer and mostly used his writing skills for creating social awareness in the depressed classes. He penned a book Mandal Mahatme in 1924 to create awareness amongst the people against the evils in society. He distributed free copies of this book among the people. This book created a significant impact on the people and the Dalit people in the area stopped watching and enjoying plays based on Hindu gods. He also wrote a play Veer Balak (Brave Child) and staged it to create a new wave of awareness among the people. He wrote and published Songs of the Market and Songs of the Hearth. His articles were also published in Weekly Janta, which was edited by Dr. Ambedkar.

Hardas met Dr. B.R. Ambedkar in 1928 for the first time. Though he started his social activities long back, his political career get a push with this meeting. In the same year, Dr. Ambedkar requested him to give his witness in front of Simon Commission. Later in year 1930-31, with regards to the Second Round Table Conference, when question arose about the real leadership of untouchables, Hardas sent a telegram to Ramsay MacDonald, the then prime minister of the United Kingdom, that Dr. Ambedkar is the real leader of untouchables and not Mahatma Gandhi. He also created an opinion about this in different parts of the country and sent a total of 32 telegrams to Mr. McDonald by various untouchable leaders. Like Dr. B.R. Ambekdar, Babu Hardas wanted greater participation of the depressed classes in the legislative assemblies. He appealed the governor of Central Provinces and Berar to nominate members among the depressed classes to the legislative council, district local boards, and municipalities. He was among the main organizers of Conference of the Depressed Classes at Nagpur on August 8, 1930 presided over by Dr. Ambedkar. This conference passed the resolution to have separate electorates for the depressed classes. This conference formed All India Depressed Classes Federation and Babu Hardas was elected as a joint secretary of the federation. The second conference of All India Depressed Classes was held at Kamthi on May 7, 1932 and Babu Hardas was the president of its reception committee. At this meeting, he was elected as a secretary of the national body of the federation.

Babu Hardas became secretary of CP and Berar branch of Independent Labour Party (ILP) in 1936. He fought the assembly elections in 1937 from Nagpur-Kamthi constituency and won. Moon gives an interesting account of how Babu Hardas won the election against a wealthy Indian National Congress candidate from the constituency. Babu Hardas was even forced, with the help of local goons, to take back his candidacy.

In 1938, he was also nominated as the president of the CP and Berar branch of ILP. In 1939, he fell sick of tuberculosis and his political career came to an abrupt end by his death on January 12, 1939. Unanimous resolution for Mahavidarbha was passed in 1938 during his time . He is Lion of Vidarbha . He was native and son of soil.

Babu Hardas left a significant impact on the depressed classes even after his death. Moon (2001) notes that “Just as a comet appears, bringing light throughout the sky, and then vanishing in instant, so it happened with Hardas.” The greeting phrase Jai Bhim coined by him has become a general term of greeting amongst the Dalits in India. It is also a formal greeting phrase of Bahujan Samaj Party, a prominent Dalit-based party in India. Besides all his contribution to the uplift of the depressed classes, Babu Hardas is still honoured as the pioneer of Jai Bhim.