Why don’t governments give importance to Saheed Udham Singh? Is it because he was Dalit? Why does government give so much importance to Bhagat Singh and his colleagues, is it because he was Jat Sikh, who consider themselves as par with upper castes and better than other Sikhs? Rajguru was from Maharashtra and belonged with Deshastha Brahmin community. Sukhdev Thapar was Khatri Sikh again they consider themselves nothing less than kshatriyas! Saheed Udham Singh suffered so much in life but has been ignored by governments.

Udham Singh (26 December 1899 – 31 July 1940) was an Indian revolutionary and a brave hearted man best known for assassinating Michael O’Dwyer on 13 March 1940 in what has been described as an avenging of the Jallianwalla Bagh Massacre.Singh is a prominent figure of the Indian independence struggle. He is sometimes referred to as Shaheed-i-Azam Sardar Udham Singh. 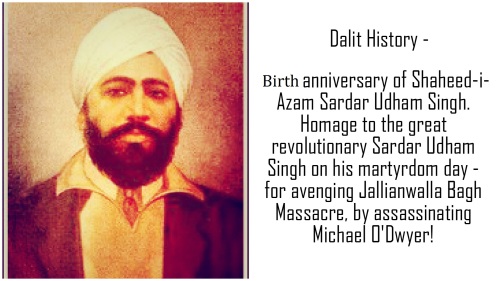 On 13 March 1940, Michael O’Dwyer was scheduled to speak at a joint meeting of the East India Association and the Central Asian Society (now Royal Society for Asian Affairs) at Caxton Hall. Singh concealed his revolver in a book, entered the hall, and stood against the wall. As the meeting concluded, Singh shot O’Dwyer twice as he moved towards the speaking platform, killing him immediately.

On 1 April 1940, Singh was formally charged with the murder of Michael O’Dwyer. While awaiting trial in Brixton Prison, Singh went on a 42-day hunger strike and had to be forcibly fed.

When asked about his motivation, Singh explained:

I did it because I had a grudge against him. He deserved it. He was the real culprit. He wanted to crush the spirit of my people, so I have crushed him. For full 21 years, I have been trying to wreak vengeance. I am happy that I have done the job. I am not scared of death. I am dying for my country. I have seen my people starving in India under the British rule. I have protested against this, it was my duty. What a greater honour could be bestowed on me than death for the sake of my motherland?

Shaheed-i-Azam Sardar Udham Singh had changed his name to Ram Mohammad Singh Azad, symbolizing the equality of all faith and of the three major religions of India: Hinduism, Islam and Sikhism.