PM Modi – Lord Buddha died when someone hit a nail on his ear! 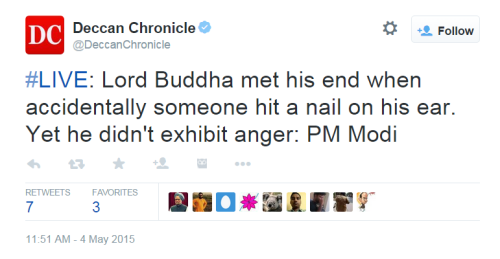 Seems like he is reading books published by terrorist organisations like RSS. How can one accept all this? All this is utter lie and no one with right mind can accept this. Modi is trying to erase true history and is trying to propagate fake ideas. In reality, Buddha died a natural death, all this is lie what Modi is preaching. Check out what Dr. Ambedkar had written about the end of Buddha in The Buddha and His Dhamma. Modi has definitely hurt the sentiments of Buddhist community in India again and again.

Further, in the same speech today, Modi said that Buddha described women empowerment as – in next birth all women will be men! In reality, there is no such reference that Buddha said all this. Buddha never believed in rebirth, then how can Modi say and quote some book, written by some RSS person that in next birth women will be men? It is really shameful. Next, according to Modi, Buddha said – in next birth lower caste people will be born as higher caste people! What a shame again, there is no such thing Buddha ever said, Buddha and Buddhism doesn’t believe in caste, it is only in Hinduism. In other words, what Modi is saying that if we are reborn, we will still have caste system and caste discrimination!! Buddha was against any kind of discrimination, how we can accept what Modi is saying? This is degrading the great personality of Buddha, who stood against all kinds of discrimination.

Apart from the all this, Modi mentioned in his speech that wherever he has gone (abroad), he makes sure that he goes to Buddha temples there. But in reality it must be remembered that the main reason for all this is that in western or any other developed country, if India has any good image, it is because of Buddha, not because of any other fake God. People in those countries feel safe in the hands of Buddha but it’s shameful that India doesn’t value it’s great personalities. Leave aside giving importance to Buddha, people like Modi malign Buddha.

2 responses to “PM Modi – Lord Buddha died when someone hit a nail on his ear!”