24 January 1942: Gandhi was shown black flags in Nagpur by the Ambedkarite movement.[1]

In 1941, the Chokhamela hostel management in Nagpur, with the collaboration of some Harijan students decided to call M K Gandhi for the hostel annual gathering. Most of the students, who were strong Ambedkarites and activitsts of the Samata Sainik Dal, opposed this. However, no one was in the mood to listen to them. Sadanand Dongare, an Ambedarite activist lived in the hostel, but felt he could not vanquish the idea of bringing Gandhi while staying there. One or two kilometers away from the hostel towards the railiway lines, there stood a hostel for Mahars named Gaddi Godam. He took a room there and laid out all his plans. The youth of north and central Nagpur came together.

By the day of Gandhi’s planned arrival i.e. 24 January 1942, a huge pavilion had been erected in the central area of the hostel’s open ground. A strong line of police was placed outside. Nanasaheb Gavai, Kisan Fagu Bansode, and other Mahar opponents of Dr. Ambedkar were members of the managing board. The president was Chaturbhajabhai Jasani of Gondia district who was a loyal member of Congress and a big leader of Madhya Pradesh. He brought Gandhi from Delhi, but he took him off the train two stations early; and because of this the Ambedkarite community, which was spread throughout Nagpur, was led to believe that Gandi had not come. However, Gandhi had come to Nagpur in the company of Jasani.

On the east side of the Chokamela hostel lay a parallel railyway line running north – south. This line goes via Itwara, Katol and Kalmeshwar to Delhi and east of Calcutta, Stone rocks had fallen on the railway line. Women and men, young and old gathered on this line, and shoulted, “Long Live Ambedkar!” On the north, south and west of the hostel lay people’s houses and narrow roads.

Gandhi’s car came to the hostel from behind. There the members of the reception committee were waiting to welcome him. While they were trying to shout “Long LIve Gandhi,” a noise like one voice could be heard from the thousands of demonstrators outside of hostel: “Mahatma Gandhi go back!” And as this noise reached the neighbourhoods around, people began to run towards the hostel.

The hostel was a four-sided block two hundred by two hundred feet in size. The pavilion had been set up in the open ground in the middle. Here along with the students of the hostel, distinguished guests had been invited to sit. But there were many Ambedkaritie Dalits among the students. Until Gandhi went onto the stage, everything was quiet inside. But once he rose to speak, some of the Ambedkaritie students in the audience stood up and began to shout, “Gandhiji, we have many questions for you.” Gandhi was standing quietly. He said, “Yes, ask them.” But the turmoil only increased. No one could hear the questions in that confusion. The hundreds of people standing outside on the railway lines began a massive stone-throwing into the hostel. The stones fell inside the pavilion also. There was no sign of halting this attack. Once the stones hit the canvas, it began to collapse. No one would give Gandhi a chance to make his speech. In this confusion, the organizers brought Gandhi out of the pavilion to protect him. Just as he had come in by the back door, so he left.

With the shouting of “Long Live Ambedkar! Bhim Raj is coming soon!” Gandhi’s car departed with black flags shown to him. The incident showed the ferocity of the anti-Gandhi sentiments of our people after the signing of the Poona pact. 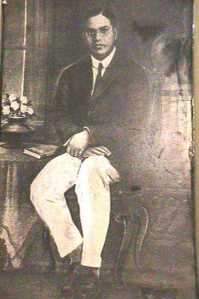 24 January 1950: Consituent assembly met and in all 284 members appended their signatures on the Constitution of India

H.V.R. lyengar, Secretary of the Assembly announced that only one nomination paper was received for the office of the President of India (election was on 21 January 1950). The name of that candidate was Dr Rajendra Prasad. His nomination was proposed by Jawaharlal Nehru and seconded by Sardar Vallabhbhai Patel. Thus Rajendra Prasad was duly elected to the Office of President of India. The members then fell over one another to sing paeans to the President. Nehru led the brigade with a speech that ended: “It is a comfort for us all to know that in future tasks and struggles, we shall have you as the Head of this Republic of India, and may I, sir, pledge my loyalty and fealty to this Republic of which you will be the honoured President.” Not to be out-done, Patel too joined the chorus of congratulations. This was followed by many members. One by one, they showered praise on the President, paying no heed to his repeated requests to stop, till, finally, he stopped the discussion with “I am sure I have the House with me on this occasion as on all occasions, and so, I would request Members who are anxious to speak to desist.”

Three copies of the Consitution of India were then kept on the table. One was in English completely hand-written and illuminated by artists with hand-calligrapy, the corners that illuminated with gold leaf and each chapter beginning with an illustration by Nandalal Bose. The second copy was in print in English. The third copy was also hand-written in Hindi. The Constitution of India was prepared under the Chairmanship of Dr. B.R. Ambedkar in the Consituent Assembly who had worked tirelessly day and night. While deliberating upon the draft Constitution which Dr. Ambedkar had piloted, the Assembly had moved, discussed and disposed of as many as 2,473 amendments out of a total of 7,635 tabled.

The Members were then requested one by one to come and sign all the copies. The idea was to call them in the order in which they are sitting in the House. But, as the Honourable Prime Minister Nehru had to go on public duty, he was requested by the President to sign first. Thus, Nehru was the first person to sign the Indian Constitution; he was so excited that he did so without leaving any space for the President, Dr Rajendra Prasad, who had to squeeze his signature above that of Nehru’s.

Kusumakant Jain (now in Indore), was the youngest member at 28 when he had joined the Counsituent Assembly in 1949. He recalls in his interview in Indian Express dated 26 January 2009 that members were in such a rush to sign the Constitution that the President had to call them to order. “Ministers come and go, who remembers them, but the Constituent Assembly’s membership was going to come only once,’’ he said. He had quit a ministerial post in the then Madhya Bharat Legislative Assembly to head for Delhi. But once he joined, “I felt inadequate before the giants,” he had admited. Infact he spoke only once when he argued for Hindi to be the National language. He remembers the debates were dominated by Ambedkar, Nehru, Patel, T.T. Krishnamachary, Tegchand Baxi… some names he doesn’t remember, some details get mixed up with the debates in the provisional Parliament. He recalled the flowery speeches of Maulana Azad, but it was Dr. Ambedkar who left the deepest impression. “He was an intellctual giant. Nehru was equally good but he always had his political interests in mind and would oppose Ambedkar on that count.” In fact, one of Jain’s cherished memories is sitting with Dr. Ambedkar in what is now the central hall of Parliament.