9th January in Dalit History – Dr. Ambedkar at the fourth sitting of Round Table Conference in London

9 January 1930: Leadership cannot be imposed, it must be accepted by those on whose behalf it is claimed – Dr. Ambedkar

Janta newspaper reported the following: ‘The greatest presumption on Gandhi’s part at the Round Table Conference was that he claimed that he represented the depressed classes and not Dr. Ambedkar…. Leadership cannot be imposed, it must be accepted by those on whose behalf it is claimed.’

9 January 1931: Dr. Ambedkar at the fourth sitting of Round Table Conference in London, recommended transfer of police powers from minister to the Governor in times of imposition of emergency[1] 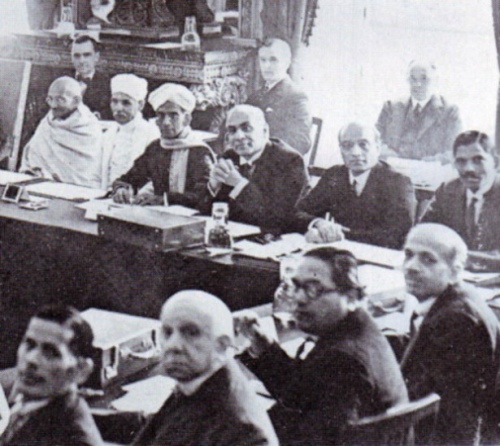 Dr. Ambedkar at the Round Table Conference

This was the fourth sitting of Round Table Conference in London on the sub-committee No VII where the Police Act was being deliberated.

Mr. Zafrullah Khan : If I may add just this. Perhaps the members of this Committee are not all aware that both the Federal Structure Sub-Committee and the Joint Sub-Committee set up by Sub-Committees Nos. I and II have suggested quite a large number of enactments on comparatively unimportant subjects to be placed in that list under Section 80(3)(h)„ and if we put the Police Act under that it will not contravene any principles whatever.

Dr. Ambedkar: I am in general agreement with Mr. Zafrullah Khan. The reason why the Police Act is not placed in the Schedule today is that the subject is a reserved subject, therefore as a matter of fact the Government of India has a complete control over the Department of Law and Order; and when the Department of Law and Order comes to be transferred the position will be altogether different. I think it will be necessary to consider whether we should not at least for the transitional period, consider the necessity of certain safeguards at least for keeping such as they exist at the present time.  I personally am in favour of the suggestion that is Police Act should be included in the Schedule which requires today the previous sanction of the Governor-General or the Government of India. There is another point to which I should like to draw your attention with respect to the question of the Police and the Department  of Law and Order, a point which I raised also in the Provincial Constitution Sub-Committee. This question has been considered, of course, from the standpoint of the responsibility of the future Provincial (State) Governments.  It seems to me that this question has also to be considered from the standpoint of the different minorities in the Provinces and the emergency occasions which may arise on occasions of communal trouble and such other emergencies.  It seems to me that it is indeed a great safeguard for the minorities in the different Provinces to know which officer belonging to what community is going to administer law and order in that particular locality when a communal riot has taken place.  We are all aware that all Police Officers are accused of partiality and of showing favour to one community or the other.  There may not be sufficient justification for that accusation; but there maybe cases when there may be abundant justification for the partiality of the officers operating law and order in those particular localities. It seems to me that it is very necessary in the interests of the protection of the minorities that the transfer and posting of Police Officers should not be, at least in times of emergency, in the hands of Ministers. It may be that a Minister who may have a communal majority in the Province may on any particular occasion shift a Police Officer who may not favour the particular community to which he belongs.

Mr. Zafarullah Khan : Ordinarily the Inspector-General does it.

Dr. Ambedkar : I know that in the Bombay Presidency a great row was created on account of the transfer of Police Officers. I do not know whether it was done under the Inspectorof Police or by the Officer in charge; but I think that is a great safeguard which it is necessary to provide for in the future Constitution of India.  My specific proposal is this, that in cases of emergency, as a riot or communal trouble takes place, the Governor should have over-riding powers over the Minister in different localities with regard to the Police.

The dinner was attended by Jekal – the Reporter of Sentinel, Rao – the Chief Reporter of Times of India, Balsarar – Journalist, P. N. Raj Bhoj, Muthaiah Mudaliar – former Minister of Madras, Chockalingam – an advocate and son of the former and others. It was over by 11 p.m.

9 January 2011: Statues of Mayawati and Elephant ordered to be covered up ahead of Uttar Pradesh Assembly elections[3]

The Election Commission of India said that the statues might influence voters and must stay covered until the end of assembly polls in March. Mayawati had built statues of icons of Dalit community and herself in various parks and educational institutions in capital, Lucknow, and other towns and cities of Uttar Pradesh. The parks in the state capital, Lucknow, and Noida (Gautam Budh Nagar District), have more than 75 stone elephants. Critics accuse her of self-glorification. Her spending on statues and memorials has been described as “shameful” by them. She accuses them of conspiring against her. Statues of political leaders are generally put up posthumously, but Ms Mayawati says that belief is outdated.

The government was ordered by Chief Election Commissioner SY Quraishi to cover the statues by evening of 11 January. Under election rules, portraits and calendars bearing photographs of the chief minister must be removed from government offices ahead of elections.

Mayawati’s Bahujan Samaj Party termed the order as “one-sided and against natural justice”.

There were critisims from some quarters to the EC decision. E.g. ‘the bicycle is a party symbol too. Do bicycle riders keep the cycles at home or cover them up and ride them? The Congress symbol is the ‘hand’ — the human hand. Does this mean people’s hands will have to be covered? I mean, they walk into the polling booth with two symbols of the Congress per person. This is subliminal advertising — is it not? I suspect the people will have to either cover their hands with gloves — or boxing gloves perhaps — but that would make it too obvious.[4]

The Election Commissioner responded, ‘Are All Hands, Lotuses, Cycles Created Using Govt Funds?’[5]. To this too there were responses from various quarters like the one cited below of a letter from Pindiga, Hyderbad to Outlook magazine[6]:

‘BSP being a party that has come into being on the philosophy of Dr.B.R.Ambedkar, Mahatma Phule, Periyar and other social thinkers who wanted to establish a just society. It is in this context that one should understand the parks established in honour of the leaders who showed a path to the downtrodden. If the argument given by EC that anything built from public funds that could influence the voters, “… are they created using government funds and displayed in an election situation? Second, even when these are created with government funds, we need to see if they are part of the normal functions of any government, irrespective of party affiliation?” How could one see parties asking people to vote for their party on the schemes brought out by them? Eg. Congress asking people to vote on the MGNRES, RTI, Development, etc. is it not one way of influencing the voters asking for votes on schemes implemented from ‘Public Funds’. The EC’s logic of public funds being used is absurd and against the democratically elected government’s mandate to execute its schemes for its people. It is worthwhile to recollect Dr.B.R.Ambedkar’s words, “For ours is a battle not for wealth or for power. It is battle for freedom. It is the battle of reclamation of human personality” and it is that culture which is reflected in parks which the so-called ‘elites’ of the Indian society cannot digest. And the bogey of ‘Public money’ being wasted is just hogwash.’

[2] K V Ramakrishna Rao, The Historic Meeting of Ambedkar, Jinnah and Periyar, A paper presented during the 21st session of South Indian History Congress held at Madurai Kamaraj University from 18 to 20 January 2001 and published in the proceedings, pp.128-136

One response to “9th January in Dalit History – Dr. Ambedkar at the fourth sitting of Round Table Conference in London”