Dr. B. R. Ambedkar on Indian currency and RBI 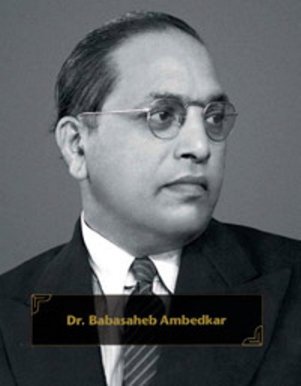 Did you know Reserve Bank of India (RBI) came into picture according to the guidelines laid down by Dr Ambedkar? RBI was conceptualized as per the guidelines, working style and outlook presented by Dr Ambedkar in front of the Hilton Young Commission. When this commission came to India under the name of “Royal Commission on Indian Currency & Finance”, each and every member of this commission were holding Dr Ambedkar’s book named “The Problem of the Rupee – Its origin and its solution.”

(The legislative assembly passed this under the name of RBI act 1934, its need, working style and its outlook was presented by Dr Ambedkar in-front of Hilton Young Commission. Read, “Evidence before the Royal Commission on Indian Currency and Finance” and “The Problem of the Rupee – Its origin and its solution.”)

What hurts many of us is the picture of Mr. Gandhi on the Indian currency. We need to ask everyone what’s the contribution of these two leaders (Rabindranath Tagore and Mr. Gandhi) towards Indian currency, finance and economics, and who deserves to be there on the signposts or on Indian currency?

If a man with God’s name on his tongue and a sword under his armpit deserved the appellation of a Mahatma, then Mohandas Karamchand Gandhi was a Mahatma.    – Babasaheb Ambedkar

Writing about who deserves the place on Indian currency reminds me of a Hollywood movie “Do the Right Thing” directed a way back in 1989 by Spike Lee. Movie revolves around the demand of Afro-Americans to place some pictures of black heroes on the “Wall of Fame” in a pizza shop (where all pictures are of Italian heroes as pizza shop owner is from Italy and very proud of that) as the pizzeria is situated in a black neighbourhood and sells pizza to black people.

At the end of the struggle Afro-Americans succeeded to have a picture of Malcolm X and Martin Luther King, shaking hands on the “Wall of Fame.”

(excerpts from article “Why weren’t we told?”)

115 responses to “Dr. B. R. Ambedkar on Indian currency and RBI”